The Power of Habeas Corpus in America: From the King’s Prerogative to the War on Terror, Anthony Gregory 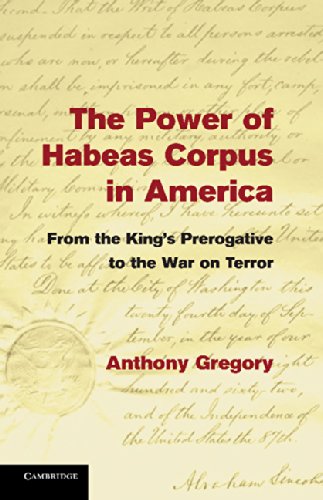 Anthony Gregory portrays the history of the writ of habeas corpus—the legal proceeding whereby a prisoner seeks release from government‐enforced con­finement—as a complex and conflicted one. Challenging the prevailing view, Gregory argues that habeas has often been rendered “impotent” by government manipulation (p. 5) and even becomes, at times, a tool for increasing govern­ment power. These consequences stem from the writ’s dual nature. “It is a tool known for its service of liberty,” he says, “yet at its core it entails an authoritarian element” (p. 4). Habeas corpus amounts to an order by a government actor commanding another government actor to bring forth a prisoner. Thus, it has been subject to political forces.

Developments in the writ’s history illustrate this paradox. For example, the 1679 Habeas Corpus Act resulted from an intragovernmental power struggle. In antebellum America, habeas corpus petitions were filed to recover fugitive slaves as well as to free slaves and abolitionists. In Ableman v. Booth (1859), proslavery Chief Justice Roger Taney ruled that state courts could not interfere, via habeas actions, with the process of recapturing slaves (p. 89). Another example that Gregory provides is the Warren court’s crim

The Politics of Prisoner Abuse: The United States and Enemy Prisoners after 9/11, David P. Forsythe Reviewed by ROBERT PALLITTO