The First Presidential Contest: 1796 and the Founding of American Democracy, Jeffrey L. Pasley 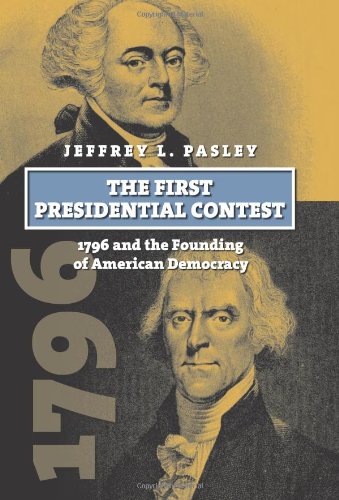 The presidential election of 1796, memorialized in history tomes for the bitter divisions the campaign mirrored among citizens in the fledgling Republic, receives innovative and refreshing analytical consideration in this eminently readable and clever account of the Adams–Jefferson contest. Jeffrey L. Pasley’s major contribution is to the notion of party development in the late eighteenth century. Challenging the conventional wisdom in the dominant political sci­ence literature, the author contends that the election of 1796 has been largely overlooked in contemporary scholarship, due to the lack of institutionalized parties, which is, in his view, a problematic definition even in the contemporary era. For Pasley, “The first contested presidential election came about as a result of popular politics, broadly conceived, even if parties and elections themselves were not highly participatory” (p. 14). Eschewing the notion that political parties are simply “devices for collecting votes” (p. 5), the author invites us to look beyond formal political party structures as well as a traditional focus on elite personalities and the candidates themselves (who did not campaign, given the custom of the day) and embrace the cultural, ideological, and symbolic features that the dynamics of the 1796 campaign represented at