The Tough Luck Constitution and the Assault on Health Care Reform, Andrew Koppelman 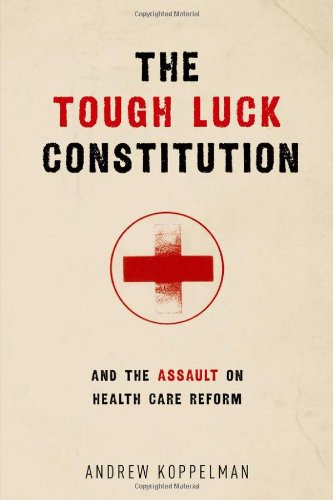 The U.S. Constitution created rules about the distribution of powers within the national government. These rules proliferate opportunities to block legislation or its implementation. Except under the right rare circumstances, they inhibit the U.S. government from addressing major social evils—and one might say “tough luck” to the losers. Under recent circumstances, the rules make it difficult to conduct even routine business.

Andrew Koppelman’s book, however, is only tangentially about this type of “tough luck Constitution.” Koppelman focuses on how the Constitution was used in arguments about the powers of the national government to help those with the tough luck to be without health insurance. He analyses the arguments made for overturning the Affordable Care Act (ACA) in NFIB vs. Sebelius, the social theory from which those arguments were derived, and the reasoning used by Chief Justice John Roberts in his decision partly upholding and partly rejecting the legislation.

Koppelman emphasizes the political opportunism that included Republican legislators reversing their previous positions about an individual mandate (p. 3). But he shows how arguments made in subsequent debate and litigation derived from principles of “tough