Days of Fire: Bush and Cheney in the White House, Peter Baker 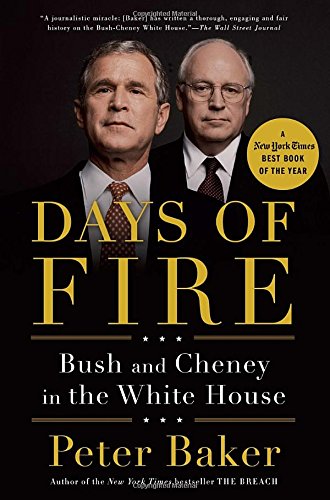 Quick: how much older is Richard B. Cheney than George W. Bush?

If your first instinct is to say anything greater than five years you will be wrong. The mistake would be forgivable. When Bush ran for president in 2000, his entire experience in government consisted of six years as governor of Texas. When he picked Cheney as his vice presidential running mate, he chose someone who had served as White House chief of staff, secretary of defense, and minority whip in the House of Representatives. “Green” was a word often used to describe Bush. Cheney, on the other hand, was “seasoned.”

Bush’s selection of Cheney fit the late‐twentieth‐century pattern. Starting with Jimmy Carter’s election in 1976, service as governor displaced service in the Senate as the standard credential for successful presidential candidates. But the same post‐Vietnam, post‐Watergate electorate that preferred to draw its presidents from “outside the beltway” wanted some assurance that their ad­ministrations would be competent in foreign and national security affairs. Carter, Ronald Reagan, Bill Clinton, and George W. Bush each provided that

The Politics of Gambling in the South, Michael Nelson and JOHN LYMAN MASON

The Myth of the Modern Presidency, David K. Nichols Reviewed by Michael Nelson

The President and the Court: Reinterpreting the Court-packing Episode of 1937, Michael Nelson