The Language of Contention: Revolutions in Words, 1688–2012, Sidney Tarrow 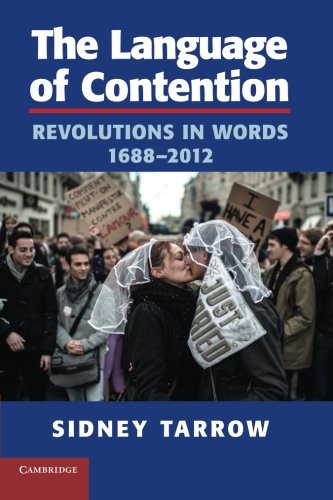 In Marxism and the Philosophy of Language, Valentin Volosinov (1973) posits that the generic conventions of reporting others’ speech vary over time and place, and that these variations, if tracked, can reveal a great deal about changes in the ordering of social hierarchies. Sidney Tarrow’s The Language of Contention, following Volosinov and his better‐known collaborator and mentor, Mikhail Bakhtin, argues that language—and in particular, keywords of social protest—are also indices of social change. Tarrow explicitly argues that “the symbols, mentalities, and narratives that actors employ can track real‐world changes in contentious politics” and “as new words for contention diffuse across social and territorial boundaries to new actors, such words can tell us how meanings change as the same words are used by different actors” (p. 5). Thus, Tarrow takes on Volosinov and Bakhtin’s historical and “dialogical” view of language, seeing it as situated, multivocal, and changing, pulled vari­ously by “centripetal” and “centrifugal” forces of structured social interaction. Tarrow sees language as being variously stable and volatile, according to whether given words “symbolically resonate” with other words and meanings,