A Storm over This Court: Law, Politics, and Supreme Court Decision Making in Brown v. Board of Education, Jeffrey D. Hockett 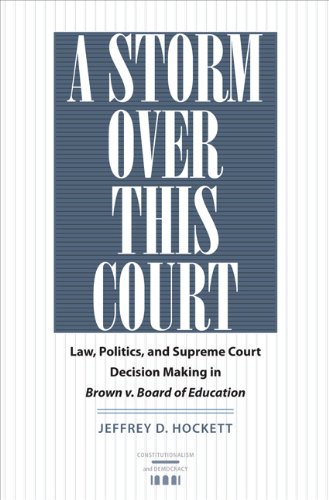 At this 60th Anniversary of Brown v. Board of Education, Jeffrey D. Hockett offers us a new interpretation of the dilemmas, debates, and deliberations that members of the Court engaged in on their way to this decision. Hockett challenges conceptualizations of the decision in Brown as emerging purely from any one set of motives and that it can be analyzed through only one theoretical or methodological lens. Instead, he argues through painstaking review of the discussions between the justices about the case and early drafts of opinions that different justices were swayed by different arguments, took into account different considerations, and made different compromises. In short: There was no “one” road to Brown v. Board—there were potentially as many paths as there were justices.

Did the justices, as Bork argues in The Tempting of America: The Seduction of the Law, act on their own personal beliefs in Brown? Was Brown,ashe claims, the beginning of judicial activism and the signal of a new Court, untethered to judicial prudence? Or did they act to defend the honor of the Court, seeing that public opinion was moving in the direction of racial integra­tion and that this was the correct way to go regardless of t