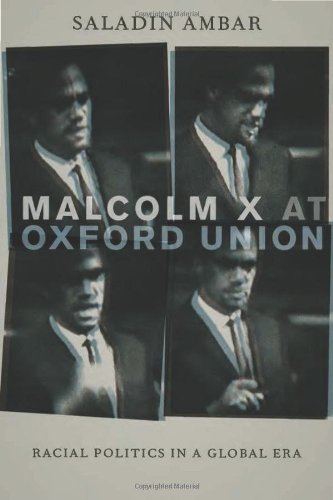 In this well-written book, Saladin Ambar adds substance to the extensive literature on Malcolm X. Retracing the steps of Malcolm X in France and England, where he debated at the Oxford Student Society, Ambar contends that the debate comprises the foundation of Malcolm X’s political philosophy, particularly the one he espoused at the end of his life. Indeed, during this important debate, not only did Malcolm X outline a notion of humanity based on a universal principal of equality, but he also described the struggle for equality in the United States, Europe, and Africa as an emancipatory process for both the oppressor and the oppressed. Moreover, he explained why, in the name of justice and equality, he stood by the famous dictum “By any means necessary.” But here, Ambar leaves us wishing for a more-nuanced explanation. One would like to know a bit more about possible intellectual connections with Aimé Césaire, Frantz Fanon, and Jean Paul Sartres, authors whom he surely had read. The ideas of Discourse on Colonialism by Césaire seeped into Maloclm X’s discourse, and most importantly, the notion that marginalized people must resort to violence in order to exist had already surfaced in Fanon’s and Sartres’s works.

One of the most important contributions in this book, however, is the discussion focusing on the international dimension of Malcolm X’s political activism. According to Ambar, the African-American leader sought to forge international alliances in order to advance the African-American quest for socio-political equality. These international alliances between African Ameri­cans in Europe, Africa, the Caribbean, and the United States made sense because Caribbean and African labor migrants in England and elsewhere experienced their share of anti-African American racism. In other words, Ambar depicts Malcolm X as an advocate of human rights across continents. In contrast to the existing literature on Malcolm X, which has shed much light on the local dimension of his political activism, Ambar successfully demon­strates that Malcolm X engaged global issues in order to address local problems. This interest in global issues allowed him to better understand how African American leaders in United States and Africa fell into the the ambush of international relations. Indeed, Ambar cleverly notes that Malcolm X under­stood the relationship between American dollars and the decline of Pan-Africanism among African leaders; likewise, he understood the relationship between patriotism, integration, and the lack of African-American criticism for U.S. foreign policy in Africa.

Ambar’s book also attempts to draw connections between the era of Mal­colm X and contemporary politics in Europe and the United States. However, one wonders if this strategy does a disservice to the book. Do we really need to have a discussion about CRAN, a Black French association born in 2005 after the riots that shook the Parisian suburbs? Nonetheless, aside from a few ambitious paragraphs seeking to connect the past to the present, Ambar’s book is an excellent study of Malcolm X’s international politics. The book truly sheds light on the dialectical relationship between Malcolm X interna­tionalism and the politics of the civil rights movement. This important manu­script is useful to scholars across many disciplines. Graduate students and scholars focusing on the civil rights movement, Pan-Africanism, American and African-American and foreign policy must read Malcolm X at Oxford Union. Scholars and students who are not well-versed in Malcolm X’s intellectual legacy will also learn from Malcolm X at Oxford Union, which successfully draws from the debate at Oxford Student Union to map the breadth and depth of his thinking.