The Myth of the Democratic Peacekeeper: Civil–Military Relations and the United Nations, Arturo C. Sotomayor 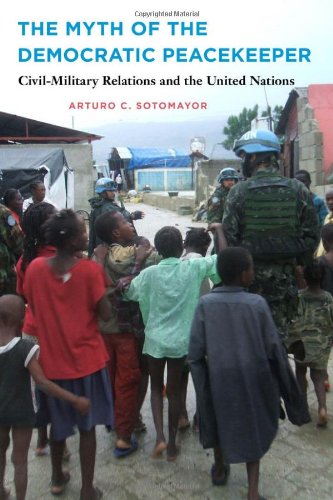 Peacekeeping appears to offer a golden ticket to civilian supremacy in democ­ratizing states. These missions allow the armed forces in cash-strapped coun­tries to participate in military operations, and they send soldiers overseas, far away from the politics of their home countries. Arturo Sotomayor offers a careful, systematic, and ultimately persuasive critique of this conventional wisdom, with case studies of Argentina, Brazil, and Uruguay. He clearly addresses three questions: Does peacekeeping help civilians reform the mili­tary? Does peacekeeping instill attitudes and beliefs in soldiers that comple­ment democracy and civilian control? Does peacekeeping craft bridges across defense and foreign policy establishments? While the conventional wisdom offers a cursory “yes” to these questions, Sotomayor responds with an astute “it depends.” And it is here that the value of his study shines. Peacekeeping can appear in a variety of forms, from observation, to enforcement, to peacebuild­ing. Peacebuilding really is more like an internal mission, and thus can actually reinforce adverse patterns of civil–military relations. Hence, it may have a different impact than observation and enforcement. The deployment also matters. If select members of the junior officer class comprise the forces sent, they can launch long-term changes in the military institution. Unfortu­nately, non-commissioned soldiers increasingly staff peacekeeping contin­gents, and they are also more likely to lack the language capabilities to create a more-immersing experience. And much of the impact is dependent upon the will of civilians; policymakers cannot simply delegate peacekeeping operations to the armed forces and expect the military to reform automatically. Finally, some military institutions may be more vulnerable to change given their historical circumstances, as in the Argentine armed forces after their defeat in the Malvinas–Falklands War.

Sotomayor thus does not simply stand the conventional wisdom on its head. Rather, he exposes the shallowness of existing approaches to peacekeeping. He does so with an argument that clearly engages realist, neoliberal, organization­al, and constructivist theory, but also remains unhindered by abstract jargon and accessible to the nonspecialist. His analysis is richly informed by literally hundreds of interviews with soldiers, political leaders, diplomats, nongovern­mentalrepresentatives and others. Fieldwork in Haiti provided material for a particularly compelling chapter that explains how Brazilian, Argentine, and Uruguayan experiences in MINUSTAH produced such different outcomes for civil–military patterns, despite their involvement in the same mission. The MINUSTAH case thus highlighted the core argument: that peacekeeping has multiple and divergent effects, effects that can be either supportive or detri­mental to civilian control and democracy.

Ultimately, Sotomayor does just as much to expose the quandary of peace­keeping as he does to highlight the contingent effects of peacekeeping. Beyond prescribed reforms in domestic civil–military relations, he duly notes several faults in the current United Nations (UN) system: the UN relies on contribut­ing states to monitor and punish peacekeepers; the UN delegates too much authority to the largest troop contributor; the UN has failed to develop a comprehensive peacekeeping doctrine; the UN draws too many peacekeepers from developing states, denying participants socialization experiences with soldiers from consolidated democracies. These are all problems that, if ad­dressed, could go a long way toward improving the impact of peacekeeping. But they are also problems that are themselves a product of larger international complications and dilemmas. The UN is a resource-poor organization, due in large part to continuing sovereignty concerns by states. The UN lacks a stand­ing military force, and therefore must negotiate peacekeeping arrangements piecemeal with an eye toward compromise with contributors. The justifiable priority given to seeking out impartial forces leads the UN to avoid contribu­tions from the more-powerful consolidated democracies. In the end, the dem­ocratic peacekeeper may be just as much impracticable as it is mythological.