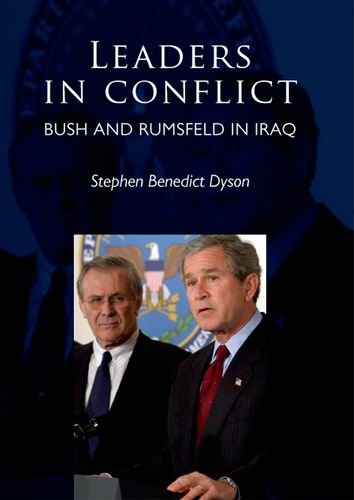 A recurring question that has been examined in many different ways is how much do the identity, goals, style, and personality of any one leader determine the course of history? Stephen Benedict Dyson’s study looks at how the attributes and interactions of two individuals—President George W. Bush and Secretary of Defense Donald Rumsfeld—shaped U.S. policy toward Iraq in the years following the U.S. invasion of the country and the overthrow of Saddam Hussein. The case provides rich material for such a study, partly because of the distinctive and, in many ways, idiosyncratic leadership styles of these two men. The two approached many of the problems of the war in ways that not only were different but also, as the book’s title suggests, contradictory.

The material also is rich because the invasion led to a cascade of difficulties, including a growing insurgency, that required the Bush administration to scramble for solutions. The two main protagonists of the book had to come up with responses not just to one problem but to a series of them, many of which were partly of their own making. Part of the value of Dyson’s account is as a concise but well-researched description of what a large role unclear instruc­tions, confused lines of authority, and other pathological attributes of decision making in the administration played in its occupation of postinvasion Iraq. This was especially true during the first year of the occupation, when there was serious disagreement on who in Washington was supervising Coalition Provi­sional Authority head L. Paul Bremer or what should be the basic objectives of the occupation he was running.

As a leadership study, Dyson’s book amply demonstrates his primary point, which is that individual leaders, and the views and styles they bring with them to office, do matter. The author also makes a strong and interesting case for another proposition, which is that leadership is multifaceted, with attributes we might tend to think of as going together not necessarily doing so. Dyson contrasts Bush and Rumsfeld on two dimensions. One is their worldview, with Bush having a black-and-white view of international affairs and the U.S. role and Rumsfeld having a more complex and nuanced one. The other is their management styles, with Bush being a cheerleader and hands-off delegator and Rumsfeld exhibiting a disturbing combination of indirection and hands­on involvement variously described as “prosecutorial” or the “commissar school of management.” In this case, it was the man with the bolder vision who had the more laid-back style.

Although Dyson provides some background to the war in terms of Bush’s worldview, he does not address the decision to wage the war in the first place. If he had, there would have been additional support for the proposi­tion that leaders matter; President Al Gore would not have launched that war. But going back that far also would show that Rumsfeld, notwithstand­ing his more complex and nuanced views, had joined with the neocons well before September 11 in supporting the use of force against Saddam Hussein’s Iraq.

Moreover, Bush’s decision to go to war was extraordinary in that he took it without any policy process to examine whether launching the war was a good idea. The absence of such a process underlay the administration’s failure to anticipate the severe difficulties of the subsequent occupation and the need for Bush, Rumsfeld, and Bremer to make up policy on the fly. In this respect, the Iraq War case is perhaps stacked in favor of the proposition that leaders matter a lot; in a more typical case, with bureaucracies fully involved, they may matter less.

The Envoy: From Kabul to the White House, My Journey Through a Turbulent World, Zalmay Khalilzad Reviewed by Paul R. Pillar

American Good Fortune and Misperception about the Outside World, Paul R. Pillar