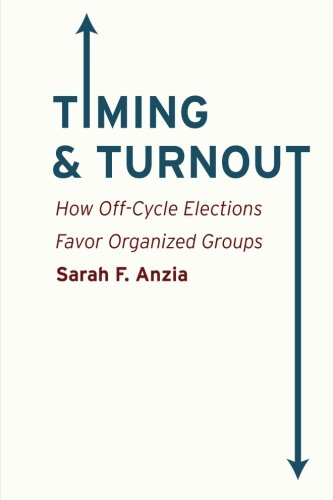 Electoral institutions are central to our understanding of democratic politics. A vast literature has asked whether direct democracy, voter registration laws, nonpartisan elections, and even ballot appearance influence voter participa­tion. However, political scientists have tended to ignore the one institutional arrangement that is the most powerful predictor of turnout: the day an election is held.

Sarah F. Anzia’s Timing and Turnout offers the first comprehensive ac­count of the causes and consequences of “off-cycle” elections in the United States. It is worth emphasizing the prevalence of these elections: nearly 90 percent of states hold at least some municipal races apart from major national elections, and three-quarters of states do so for school board elections (p. 16). Although scholars have long noted the relationship between off-cycle elections and lower turnout, with some speculating that “stealth elections” favor certain groups, Anzia is the first to develop a general theory of election timing.