Ruling Russia: Authoritarianism from the Revolution to Putin, William Zimmerman 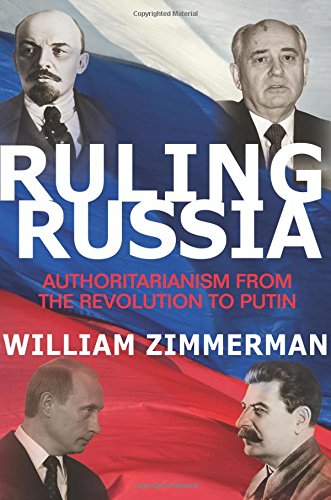 William Zimmerman’s book is admirable for its scope and ambitious attempt to explain why Russia is not a “normal” country. Zimmerman is a longtime analyst of the Soviet Union and Russia, and Ruling Russia draws on his extensive knowledge of early Soviet history in particular to argue that at certain junctures, the “selectorate”—that is, the group that chose Soviet and then post-Soviet leaders—expanded and then contracted at various times to make the system more and then less open over time. He uses the term “normal” in the way that Mikhail Gorbachev and post-Soviet leaders such as Boris Yeltsin and Vladimir Putin have used it—European and democratic.

Zimmerman’s approach is to trace the narrowing of the selectorate for Russian leaders from Lenin through Putin, although he is careful to note (quite correctly) that Russian history is not linear and that too many observers of contemporary Russian politics attempt to draw a straight line from Vladimir Lenin to Joseph Stalin to Leonid Brezhnev to Putin. As Zimmerman argues, and documents extensively, there is considerable “within-system” variation in the development of Soviet and then post-Soviet politics, such that under Stalin during the great purge, the system was closed