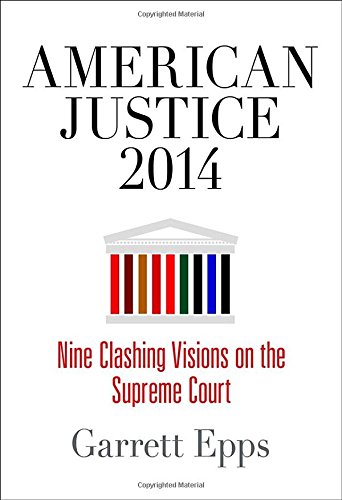 Garrett Epps has written a short, readable book appropriate for a popular audience. In American Justice 2014, he provides an overview of the U.S. Supreme Court’s 2013–2014 term, arguing that the justices have become more political and polarized over time. Epps supports his thesis by analyzing the jurisprudence of each of the nine justices through the lens of a Supreme Court decision.

Epps wears two hats. First, as a law professor, he is able to clearly discuss the major cases that were decided during the 2013–2014 term. Second, as a contributor to The Atlantic online, his press access to the Court allows him to provide firsthand descriptions of justices during oral argument and the announcement of opinions. Epps uses this unique position to guide the reader through some of the Court’s most significant recent decisions.

In addition to an introduction and epilogue, there are nine numbered chapters that correspond to each justice. Most of the chapters follow a similar pattern, except for the chapter on Justice Antonin Scalia, which reviews his dissent in United States v. Windsor, decided the previous term. The chapter focuses almost exclusively on Scalia’s gay rights jurisprudence and provides little biographical information.

Each chapter begins with an interesting anecdote about the ju