Barriers to Bioweapons: The Challenges of Expertise and Organization for Weapons Development, Sonia Ben Ouagrham-Gormley 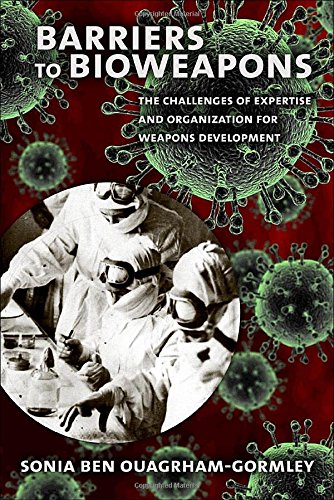 In the opening chapters of her book, Sonia Ben Ouagrham-Gormley quotes former U.S. Secretary of State Hillary Clinton warning of a potential biological weapon in December 2011: “a crude, but effective, terrorist weapon can be made using a small number of widely available pathogens inexpensive equipment, and college-level chemistry and biology” (p. 17). This statement reiterates a commonly held belief among policymakers and analysts that the threat of a biological weapons attack is increasingly likely—even imminent—because of the ever-lower barriers to entry and increasing availability of scientific knowledge and material. And yet, those who have issued such dire assessments in the past are forced to confront an interesting and important puzzle: according to Ben Ouagrham-Gormley, no terrorist group or state has yet to seize on these advances to produce an effective, working biological weapon. The question for scholars and practitioners in the field of nonproliferation is why such a compelling case made in theory has such little empirical support in practice.

It is precisely this “bioproliferation puzzle” that Ben Ouagrham-Gormley aims to answer in her book Barriers to Bioweapons: The Challenges of Expertise and Organization for Weapons Development. Drawing on concepts developed across fields, her answer is straightfor