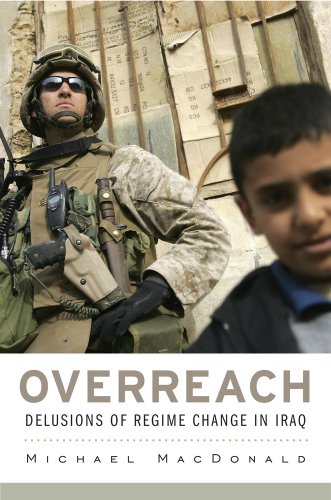 Michael MacDonald’s book may not be to everyone’s taste, but it most certainly is to mine. In his opening pages, MacDonald goes through a list of several leading explanations for the American decision to invade Iraq in March 2003, demonstrating that each of them is limited in its ability to capture more than a small part of a much larger story. Thus, he minimizes personal quirks of President George W. Bush (and his relations with his father) or Dick Cheney, geopolitical considerations focusing on Iraqi energy resources or strategic location, the role of the military-industrial complex, or the pressures of the Israel lobby. Ultimately, his primary explanatory vehicle is a kind of groupthink or collective conscience that had come to possess a good part of the foreign policy elite in Washington by the time of the terrorist attacks of 11 September 2001. Put simply, with the Cold War over and America’s superpower status unchallenged, the attitude grew that the United States was a power beyond challenge and that it had a blueprint for remaking foreign peoples to its liking—meaning their conversion, should the occasion warrant, into what by the end of the first year of the Bill Clinton administration had become known as the “enlargement” of the zone of “free market democracies.” In other words, liberal imperialism came fully i

America and the World: Conversations on the Future of American Foreign Policy, Zbigniew Brzezinski and Brent Scowcroft Reviewed by Tony Smith

The Faces of Janus: Marxism and Fascism in the Twentieth Century, A. James Gregor Reviewed by Tony Smith

Power to the People: Democratization around the World, Robert K. Schaeffer Reviewed by Tony Smith