Reviewed by James A. Russell 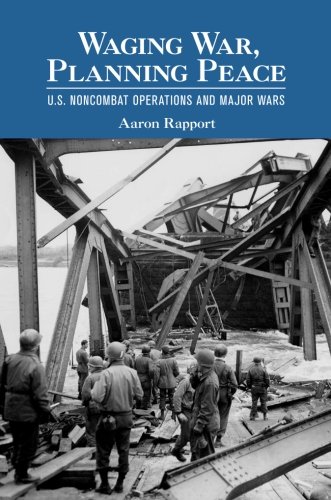 The United States remains mired in Afghanistan and Iraq after more than a decade of military operations in both countries—seemingly unable to gracefully retreat while simultaneously unable to achieve a decisively favorable outcome.

In both wars, it can be said that the United States successfully fought the war and then bungled the peace after embarking on grand and ill-conceived political and social engineering projects. Not surprisingly, America’s armies failed in their quest to “win” the peace after the enemy had been driven from the field—at least initially. How and why did this happen?

While some see the problems encountered in Iraq and Afghanistan as emblematic of a more general problem facing the United States as it seeks apply force in a post–September 11 strategic environment, it is also the case that the conditions faced by combat commanders in these wars were not unique.

A principal purpose of Aaron Rapport’s book Waging War, Planning Peace: U.S. Noncombat Operations and Major Wars is to remind us all that history provides a veritable treasure trove of examples of wars in which the United States faced the problem transitioning from fighting a war to occupying the ground that the enemy had been driven from.

Rapport seeks to explain America’s approach to the generic problem of engaging in a shooting war and then taking on the task of rebuilding the state that had just been disrupted and/or destroyed in that war. Rapport argues that construal level theory (CLT) explains the approach of U.S. officials to noncombat operations. The central assertion of his argument is that “military operations that policymakers believe will take place in the more distant future will be evaluated largely on the desirability of their goals they are meant to achieve, whereas assessments of operations in the near future will be based more on how feasibly they can be executed” (p. 2, emphasis in original). As noted by the author, the profound disconnect between the feasibility of short-term goals and more grandly stated desirable outcomes for the future is a regrettable feature of America’s military interventions.

It seems intuitively obvious that policymakers care more about the short-term results of military operations and pay less attention to what happens later. As noted in CLT, the tendency to focus more on the short term invariably clouds potential analysis of the future, which, in turn, leads to overconfidence and, later, underperformance when faced with conditions on ground to “secure the peace.” CLT focuses on the cognitive factors that drive decision making in leaders and points to psychological factors that shape the way leaders think about potential events out in the future.

The book analyzes four cases to test out the explanatory power of CLT: the occupation of Germany after World War II, the occupation of Iraq, plans to occupy Korea in 1950–1951, and attempts at state building in Vietnam. None of these cases of occupations went as planned, and it is clearly the case that policymakers focused more on the conduct of the actual war than on what they thought might happen later. But can it really be the case that approaches to the end of wartime hostilities and bungled occupations can be explained by a single theory—no matter how powerful the theory may be? These cases took place in different strategic circumstances that are difficult to reconcile and stuff into a single theory. One suspects that context, history, and circumstance cannot simply be waved away by a psychological theory of leader decision making as the factor that explains bungled occupations.

In a sense, Rapport is perhaps regrettably meeting the demands of the industry that demands theoretical rigor and purity as the measure of success in the field. In so doing, however, the work becomes less approachable to the reader and certainly to policymakers. Rapport is certainly correct in his assessment that disasters in future postwar environments might be avoided if decision makers gave more considered thought to what happens after the shooting stops, but it is not clear that he needed to plod through a full-blown treatment of CLT to make this obvious and sensible point.