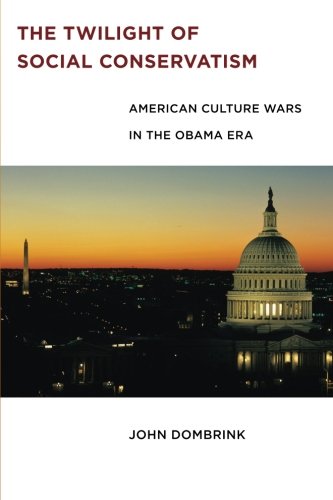 This highly accessible book examines the shifting dimensions of the “culture war” during the Barack Obama presidency, a volatile season in American political history by any measure, the meanings of which our profession will debate for years to come. Those who attempt first to make meaning of recent events do us all a great service. To be sure, their proximity is at once an important strength and malefic flaw, their views necessarily incomplete, if not sometimes myopic. And yet the brave souls among our ranks proceed anyhow, advancing theses that are sure to be nuanced or amended as our field of vision grows and their ideas are tested. John Dombrink’s The Twilight of Social Conservatism: American Culture Wars in the Obama Era is an important and valiant attempt to understand the latest round of a political culture war that has been with us now for nearly four decades.

Dombrink’s most notable contribution is to advance a counterintuitive thesis. We can all agree that the Obama years have been divisive, sometimes downright nasty, and so our impulse, in light of the volume and rancor of the conservative backlash, is to perceive social conservatives as once again on the ascent. Dombrink concludes just the opposite. Drawing on polls, demographic research, and commentary, he argues that the culture war is in fact waning. Dombrink’