The Pivot: The Future of American Statecraft in Asia, Kurt M. Campbell 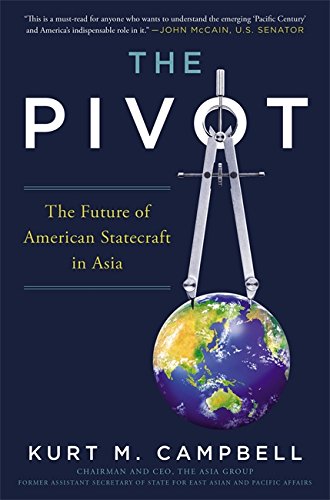 The U.S. “pivot” to the Asia-Pacific has received considerable hype, but until now, no credible and extended articulation of the concept has been forthcoming. As one of the chief architects and implementers of the policy, Kurt Campbell, former assistant secretary of state for East Asia and Pacific affairs in the Barack Obama administration from 2009 to 2013, is well placed to provide an authoritative and detailed discourse. Yet this volume defies simple labeling: it is part geopolitical assessment, part policy prescription, part memoir, and part travelogue. This is not surprising because the author has a long history of involvement in Asia. The result is a lengthy, albeit encyclopedic, erudite, and frequently engaging read. Separate chapters document the rise of Asia economically and geopolitically (Chapter 2), examine the history of U.S. policy toward the region (Chapters 3 and 4), explore possible future trajectories for Asia (Chapter 5), and address the challenges to implementing a successful Asia policy (Chapter 7).

As the author notes, the pivot has been widely misinterpreted and much maligned. So what is it? According to Campbell, the pivot is “a mixture of policies and actions—diplomatic, military, and economic—that together [make] . . . a more credible American commitment to the [Asia-Pacific] region” (p. 13). The ini