Women of Power: Half a Century of Female Presidents and Prime Ministers, Torild Skard 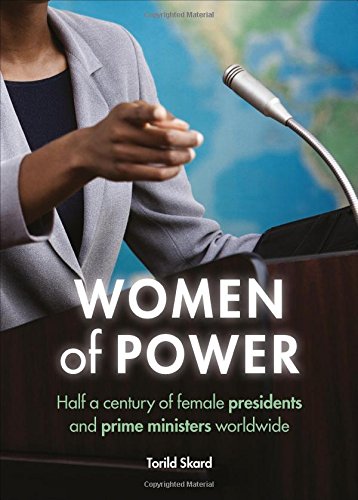 In this work Torild Skard engages in an exhaustive analysis of the rise and reign of each woman to achieve top political office between 1960 and 2010. This book attempts to explain the unique characteristics of each of the women to achieve top political office, how they achieved that office, and the effect that having a woman leader had on the policies that were pursued and adopted by those governments. Frequently referencing CEDAW and the efforts of the international community to promote women in politics, this work highlights that despite these overt attempts to promote women to top political offices, the reality is that, frequently, women achieve these offices as a result of coincidence and good timing. Despite the exhaustive nature of this book, it remains accessible to the average reader, requiring little is expected in regards to the history of any of the covered regions or countries.

Despite the accessibility of this book, three weaknesses present themselves that could have been avoided. First, Skard’s work is almost entirely atheoretical. At no point are her expectations clearly defined and generalizations, when they appear, are reserved for the final chapters. Additionally, the atheoretical nature of this work means that many of the contributions that have been made regarding the contributions of women in government more broadly, that may help ad