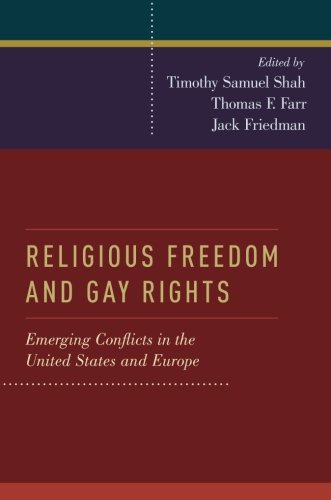 Undoubtedly, one of the most pressing issues of our time is the tension between the claims for equality by the gay rights movement and the pushback by religious communities that gay rights demands impinge on religious freedom. In recent years, this tension has been thrust into the public square. In 2015, in the wake of Obergefell v. Hodges, the historic U.S. Supreme Court ruling that made same-sex marriage the law of the land in the United States, Kentucky notary public Kim Davis was sent to jail for refusing to sign same-sex marriage certificates. She argued that signing the certificates would violate sincerely held religious views. Other “celebrated” conscientious objectors of the culture war over same-sex marriage include bakers, photographers, and florists being fined by state officials for refusing to offer their wedding services to same-sex couples.

Typical of most edited collections, there is no unifying theme in this book binding the various chapters together, other than the book’s overall subject matter. The closest thing one can find to a unifying theme is a sentence in the introduction by the editors that notes, “The contributors to this volume offer an array of different perspectives, reflecting their different expertise and prior moral and philosophical commitments. Nevertheless, they tend to converge around a forec