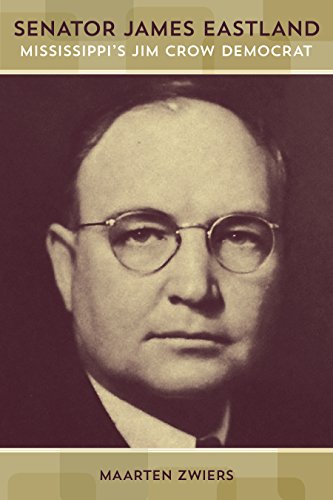 Maarten Zwiers has written the definitive biography of Democratic U.S. senator James Oliver Eastland of Mississippi. Written partially under the direction of the great British historian Adam Fairclough, Zwiers’s book offers a compelling account of the life and times of arguably the most despicable yet greatly influential U.S. senator of the twentieth century. Surely, Zwiers’s work will serve as the standard account of Eastland for the foreseeable future.

According to Zwiers, Eastland’s political career personified the South’s transmogrification from the bastion of the de jure Jim Crow caste system to the de facto segregated Sunbelt. In a compelling narrative analysis, Zwiers traces Eastland’s early life as the scion of one of the most prominent white families of Mississippi. Eastland held blood ties and maintained personal relationships that transcended the usually separate worlds of his native hill country of East Mississippi and the rich bottom land of the Delta, where he ultimately built his business operations and political power base. Zwiers shows that Eastland played an irreparable role in most of the South’s major acts of defiance to federal efforts to dismantle Jim Crow during the postwar era (1948–1973).