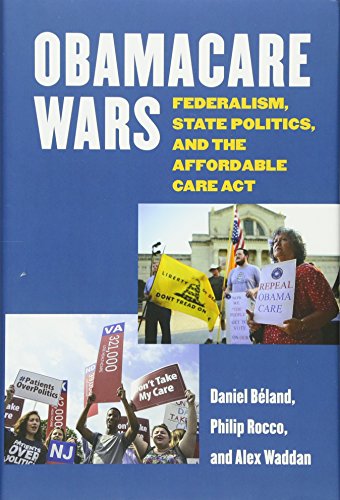 With the election of Donald Trump and Republican majorities in the House and Senate, the Patient Protection and Affordable Care Act (ACA), frequently called “Obamacare,” is unlikely to continue in its current form. Although President-Elect Trump’s campaign promise to repeal and replace the ACA “on day one” in office ignored the complex realities of policymaking, on May 4, 2017 the House of Representatives adopted a bill that would repeal major portions of the law and, as of June 27, 2017, the Senate was debating a similar bill. As Daniel Béland, Philip Rocco, and Alex Waddan argue in their excellent book, Obamacare Wars: Federalism, State Politics, and the Affordable Care Act, the Republican attacks on the ACA began during the congressional debate and continued throughout the law’s implementation. Obamacare Wars offers a rich and detailed account of how the federal government and the states bargained over the implementation of the ACA. As they put it, federalism was the “battlefield” on which the Obamacare wars have been fought. Focusing on the creation of the insurance exchanges, the expansion of Medicaid, and the execution of regulatory reforms, the book uses concepts from the literature on policy implementation and explores how policy legacies, institutional fragmentation, and public opinion shaped, and sometimes blocked, the implementation of health reform.

Long before the 2016 presidential campaign in which Donald Trump repeatedly called the ACA a “disaster,” anger at the ACA on  the  part  of many conservatives helped fuel the rise of the Tea Party and its victories in the 2010 midterm congressional elections. Opponents at the state level used a variety of strategies to block the implementation of the law, including a series of lawsuits resulting in several U.S. Supreme Court decisions. According to the authors, the first of these decisions, National Federation of Independent Businesses v. Sebelius, increased the level of institutional fragmentation and made implementation more difficult. Béland and colleagues  explain that “although the fiscal incentive to participate endured because the carrot of potentially significant federal funds for each state remained in play, the stick, which to all intents and purposes would have made participation com pulsory, was taking away” (p. 58).

In addition, the authors claim that the policy legacy of Medicaid helps explain why many states resisted expansion, while others agreed to accept it. They argue that concerns about the impact of the program on state budgets led governors in red states to resist expansion. In contrast, Arizona agreed to the expansion because “it had a history of extending Medicaid coverage to some childless adults” (p. 111). The emphasis on policy legacies in the case of Medicaid is the least convincing aspect of the book’s argument. For example, in her recent book on Medicaid politics, Shanna Rose argues that the policy legacy of Medicaid helps explain why many Republican states have expanded Medicaid (Financing Medicaid: Federalism and the Grown of America’s Safety-Net [Ann Arbor: University of Michigan Press, 2013]). The fact that these two books offer different hypotheses about the likely impact of Medicaid’s legacy on future policy raises questions about the value of the policy legacy argument. The concern is that, as Lawrence D. Brown once put it, “path dependence is, so to speak, too shallow to be false” (“Pedestrian Paths: Why Path-Dependence Theory Leaves Health Policy Analysis Lost in Space,” Journal of Health Politics, Policy and Law 35 [August 2010]: 643–661, at 643).

The efforts of the Barack Obama administration to encourage state participation in the exchanges were less successful than in the case of the Medicaid expansion. In the case of the exchanges, the authors’ arguments regarding policy legacies are stronger in the sense that the absence of an institutional legacy (or what the authors term a “thin” policy legacy) made it easier for opponents of the exchanges to resist the administration. There was no existing state infrastructure on which to build or stakeholders seeking to defend their positions. Furthermore, because the law made allowances for the federal government to create its own exchange if the states refused to do so, opponents in the states  could make implementation of the law more difficult for the federal government “without lifting a finger.” Yet, as in the case of Medicaid expansion, party polarization, coupled with the reliance of state governments to implement key provisions of the law, explains much of what happened.

The ACA is one of the most important and controversial health policies in the history of the United States. Obamacare Wars provides a thoughtful, well-written account of the fascinating politics associated with its implementation. The book illustrates the value of a detailed empirical case study. It is an important contribution to the field of policy implementation and the politics of health policy.