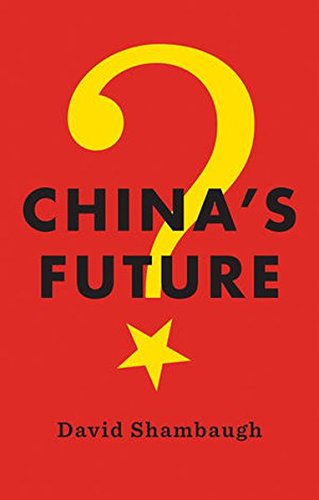 David Shambaugh's clearly organized and engagingly written volume accomplishes two important tasks. First, it fills a significant gap in the literature for general readers in foreign and public affairs by providing a cogent (172 pages of text plus notes) yet comprehensive overview of recent developments in China's economy, society, politics and foreign affairs that identifies and assesses the key elements determining China's future importance. Second, it allows this leading international China specialist to fully explain his views on how and why China is likely to develop in the future.

Very few China specialists have the depth and breadth of experience to successfully write such a volume. The book builds on Shambaugh's four decades of scholarly engagement with China as leader of various international collaborations and publications, journal editor, and author of major books dealing with the Chinese Communist Party, the Chinese military, and Chinese foreign relations. It coincides with the publication of the 550-page multidimensional guide to contemporary China, The China Reader: Rising Power (New York: Oxford University Press, 2016), which he edited.

Against that background, the volume under review identifies and assesses leading determinants of success or setback in China's economy (notably, the troubled financial system and challenges of innovation) and society (notably, issues of inequality, challenges to governance, and provision of public goods). While acknowledging many internal and external variables that impact developments in China, Shambaugh sees the key determinant in future economic policy and social policy to be the political choices of the Chinese leadership. He argues that none of the social and economic challenges he identifies can be effectively addressed or resolved without a significant political loosening and liberalization in China's governance. Along similar lines, the section examining the foreign relations of an ever more internationally involved and influential China forecasts worsened Chinese foreign relations without the recommended political reforms.

Thus, the book joins others in the pessimistic camp in the active debate among specialists about China's future. If the Hard Authoritarianism continues or intensifies, effective dealing with economic, social, and foreign policy problems is seen as less likely. The implication of this scenario is regime stagnation rather than collapse. Responding to Shambaugh's volume in various reviews and commentaries, some specialists with a more positive outlook for China and its authoritarian government have demurred. As Shambaugh anticipated, inevitable disagreements have greeted the book, which nonetheless stimulates thinking about conditions and alternatives for this emerging great power.