Opting Out of Congress: Partisan Polarization and the Decline of Moderate Candidates, Danielle M. Thomsen 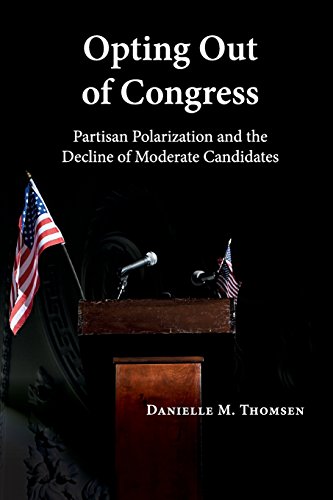 For the past decade, political scientists have raised concerns about the partisan polarization that has gripped our Congress. While we know what has happened, we still know little about why polarization has increased and persisted. Many researchers have focused on election laws, such as those that pertain to campaign finance, primary elections, and the drawing of congressional districts. Yet, as Danielle M. Thomsen notes in Opting Out of Congress, it seems unlikely that changes in election laws have had more than a minor effect on polarization. Thomsen trains her attention, instead, on the supply of candidates. Moderates no longer want to run for Congress, and those who are in Congress do not want to stay. Their decisions have a snowball effect—the fewer moderates there are in Congress, the less appealing Congress becomes for centrists.

Thomsen makes her case by presenting a theory of “party fit.” The value of legislative offices varies according to one's ideological conformity to the rest of the party. Party fit determines whether one can achieve policy goals, advance within the chamber, and simply enjoy the experience of serving in Congress. Thomsen quotes many current and former legislators reminiscing about the past and bemoaning the present. All of these comments serve to support the more quantitative explorations of the book