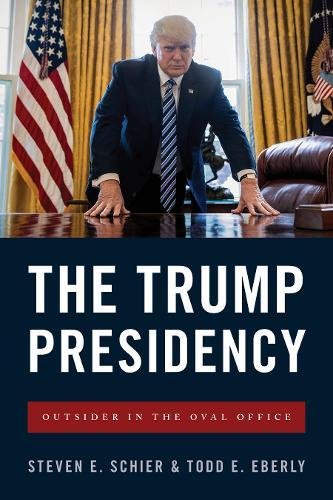 The Trump Presidency: Outsider in the Oval Office is one of the first scholarly books about America's 45th president to appear in print. Though some of its observations have already been overtaken by recent events, the book is an accurate, highly readable, and at times insightful introduction to the most controversial presidency in modern times.

The book is divided into six chapters, each of which considers a different aspect of the Trump presidency. Chapter 1 reviews Trump's presidential campaign and the reasons for his surprise election, giving special attention to the impact of angry populism, Trump's use of the media, and the uneven distribution of Democratic voters. In Chapter 2, Steven E. Schier and Todd Eberly examine Trump's presidential style, the ethics of his administration, and his stewardship of the federal bureaucracy. It is in these spheres, the authors rightly argue, that Trump has exercised particularly ineffective, if not counterproductive, leadership. Chapter 3 is dedicated to Trump's relationship with Congress, offering an assessment of that relationship through most of 2017 and comparing it with congressional-presidential relations of the recent past.

In Chapter 4, the authors discuss the president's domestic policy agenda and his efforts to implement it, considering whether Trump fits Paul Quirk&