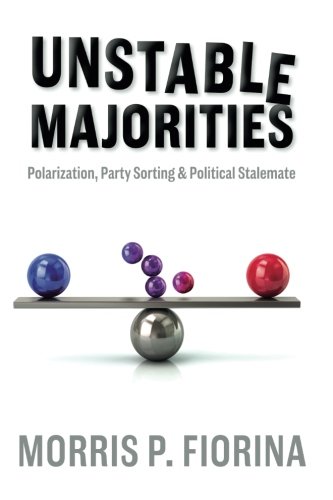 Everyday claims that the United States is descending into a culture war of two polarized and irreconcilable parties deserve more scrutiny. Morris P. Fiorina has been at the forefront of assessing and pushing back against this view, especially the blame placed on the American public. Unstable Majorities goes beyond this important myth busting to offer an explanation for contemporary paralysis: many Americans have sorted into two minority parties with distinct issue positions, but both sides have empowered their officials to overreach in office, losing the support of independents in subsequent elections and thus having to share and alternate power.

Extending his prior work, Fiorina shows that the proportion of the American public identifying as moderates is stable, the proportion identifying as independents continues to rise, and the proportion with moderate opinions on issues such as abortion is high and stable. Few Americans are ensconced in partisan media and geographic bubbles, and those in the middle do not feel represented by either party. Yet Fiorina acknowledges trends that others call polarization: Republicans and Democrats are now more likely to share their party's side in policy disputes and ideological self-identifications; citizens now see differences between the parties and view elections as consequential; the parties are becoming more socially homogenous; partisans in each camp now dislike the other party more; and those most active in politics are polarizing the most.

Fiorina also puts the nationalization of American politics in useful context. The effects of incumbency have declined, and presidential preferences now matter more for congressional voting, but both trends represent a return to earlier eras: the middle part of the twentieth century was exceptional. Because neither party has a significant edge in the public and because public opinion moves thermostatically (it becomes more conservative when political leaders and policy are moving leftward and vice versa), moderates and independents still decide elections; waves for one party or the other are still frequent.

Fiorina finds that today's politics most resemble those of the Gilded Age, when neither party was dominant, perhaps because the late nineteenth century was also undergoing economic and social transformations. He shows that other countries are not polarizing or sorting to match the contemporary United States; some nations’ major parties are converging ideologically.

But the Donald Trump era does raise doubts about some of Fiorina's points. He repeatedly argues that voters may only look like consistent partisans because the parties have been presenting them repeatedly with the same types of politicians. But Trump broke the mold and still gave us mostly the same partisan voting coalitions; partisanship remains a strong identity. Partisan media consumption has also risen considerably under Trump, partisan motivated reasoning is expanding, and Democrats are identifying as more liberal. Trump has also repeatedly raised issueless culture war divisions, such as football player protests, demonstrating that nonpolicy considerations inflame partisans.

If others have been seeing polarization while Fiorina has been seeing limited change, the caveats may be more important than the stable trends. Like the measures of public polarization that Fiorina dislikes, roll-call-based measures of congressional polarization also mix sorting across issues and partisan gamesmanship with the intended measure of extreme positions on issues. But increased procedural partisanship and alignment across issues have fundamentally altered Congress. Perhaps polarization of public opinions on specific issues is less important to the character of our politics than trends such as negative partisanship, changes in the parties’ social group coalitions, and the alignment of partisan, ideological, and social group identities. After all, issue extremists may not be necessary for extreme candidate victories.

Limits of the Conservative Revolution in the States, Matt Grossmann