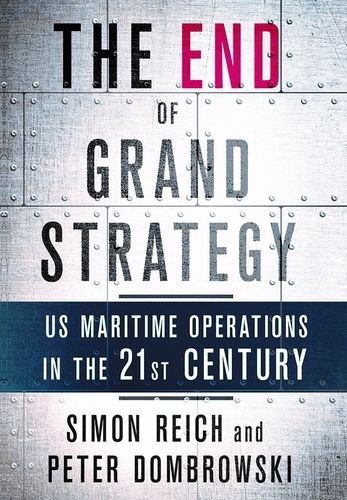 Simon Reich and Peter Dombrowski are not arguing that there will never be a need for grand strategizing, as their book's title implies, but only that such efforts are largely irrelevant for the U.S. Navy, which is very busy policing the globe—or, as one of its recruiting slogans recently put it, being “a global force for good.” Grand strategies are prescriptive guides for nations to prioritize their security resources and operations to cope with serious threats to their survival. Given that the United States has been free from such a threat since the demise of the Soviet Union, American grand strategizing in its traditional form is merely an academic exercise in the view of the authors.

Does the world's most powerful maritime force then just ply the several oceans aimlessly, challenging whatever threats to peace it happens to encounter, like a movie franchise superhero? No, say Reich and Dombrowski. It is much more nuanced than that. Rather, depending on political direction, organizational interests, and local circumstances, the U.S. Navy pursues what seem to be different strategies in different places. None of this is crisply explained.

Reich and Dombrowski identify three competing strands of American strategic thinking—hegemony, sponsorship, and retrenchment—each of which, they say, has two variants. Hegemony,