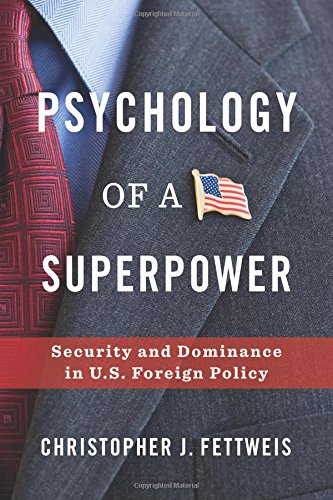 It has become conventional wisdom in American foreign policy debates that U.S. power undergirds the liberal international order and keeps a lid on major conflict and nuclear proliferation. According to this consensus, the world is dark and full of terrors, ranging from terrorists to rogue states to revisionist great powers, and the United States must maintain a globally engaged grand strategy and a massive military budget to contain these threats. In this interesting and insightful book, Christopher J. Fettweis debunks this view and shows that it is largely a figment of American psychology brought on by the United States’ position as the world’s sole superpower. He does not deny that the United States faces threats, but he points out that unipolarity causes American policymakers to exaggerate the scope and scale of these threats and the ability of the United States to deal with them.

Drawing on a deep literature from the field of psychology, Fettweis shows that powerful actors tend to overestimate their ability to control events and their own benevolence. Fettweis also uses international relations theory to show that powerful nations tend to expand their interests and activity around the globe, thereby creating more turbulent frontiers for them to defend and more threats to worry about.

According to Fettweis, U.S. leaders suffer from both

China or Japan: Which Will Lead Asia?, Claude Meyer Reviewed by MICHAEL BECKLEY

Power and Willpower in the American Future: Why the United States Is Not Destined to Decline, Robert J. Lieber Reviewed by MICHAEL BECKLEY