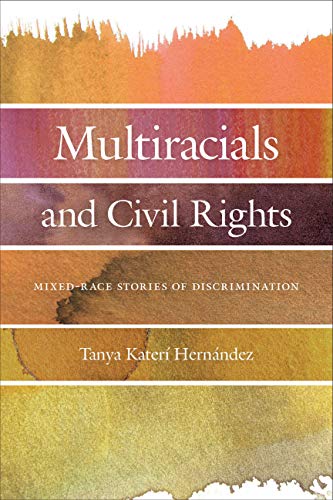 Multiracials and Civil Rights is a jewel. Relatively brief and always engaging, it presents a well-defined and well-motivated inquiry that simultaneously manages to speak to a much broader issue of deep importance. While legal scholar Tanya Katerí Hernández persuasively answers the immediate question of how multiracial people’s claims of racial discrimination are positioned and adjudicated in U.S. courts, she also provides real food for thought about the role of multiraciality in today’s racial order.

Multiracials and Civil Rights draws readers in with a puzzle: why do certain multiracial activists or scholars perceive existing antidiscrimination law as insufficient for their community’s needs? Is it indeed the case that mixed-race people’s claims of discrimination are not being adequately handled in the courts? Drawing on records for all such legal cases in the United States, in which an explicitly multiracial person alleged racial discrimination, Hernández argues persuasively that American courts do just fine by such complainants. If anything, they seem to be particularly solicitous of multiracials, treating their allegations with greater care and deference than those of other racial minorities. So where is the problem? For some multiracial advocates, it appears to lie in the courts’ pretty