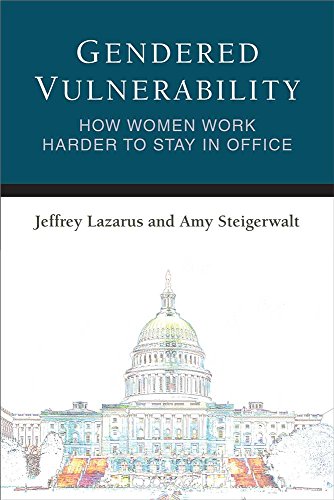 In this book Jeffrey Lazarus and Amy Steigerwalt leverage an impressive data collection to make the case that women legislators are more active and more responsive to their constituents than men. Moreover, they offer a theoretical argument to explain why women appear to work harder to meet constituent needs and demands, suggesting that women legislators’ perceptions of their electoral vulnerability—even as incumbents—motivate them to focus their legislative efforts on proving to their constituents that they are worthy of re-election.

The bulk of the text is dedicated to analyzing more than 12 measures of legislative activity and responsiveness—from the number and types of bills sponsored to the amount of mail sent to districts and staff allocated to district offices—in the 103rd to 110th Congresses (1993–2005). The analyses focus on between-gender differences in each chamber. Lazarus and Steigerwalt find the strongest evidence that women outwork and out-represent their male counterparts in the U.S. House of Representatives. Findings of gender differences are more limited in the U.S. Senate but still affirm the previous studies showing that women members are more likely to “bring home the bacon” in the form of earmarks (see Anzia and Berry 2011) and to sponsor and co-sponsor more bills and resolutions. The authors also find that women’s roll call behavior and committee assignments align more with constituent needs and interests than those of their male colleagues. Even with these differences by chamber, Lazarus and Steigerwalt fairly conclude that “electing women results in better substantive representation for all constituents” (p. 17). They effectively expand claims already evident in the women and politics literature that women members better represent women's interests by demonstrating how women’s presence in the Congress will better serve all citizens—men and women alike.

In outlining their theory of gendered vulnerability, the authors bring together a wealth of interdisciplinary literature to argue that women’s heightened sense of electoral urgency is fueled by both perceived vulnerability (partly attributable to how others view them) and evidence that women candidates face different electoral hurdles than men. The theory’s emphasis on women’s perceptions of vulnerability helps explain why women outwork their male counterparts even when objective measures of their electoral vulnerability appear low.

In addition to their abundance of data on legislative activities, Lazarus and Steigerwalt draw upon more than 20 interviews with former and current members of Congress and staff to investigate their claims of legislator perceptions of vulnerability. These interviews suggest they are on the right track, but they are limited in proving in a more robust way that congresswomen broadly feel more electorally vulnerable than their male colleagues. Recent interviews with 83 congresswomen in A Seat at the Table: Congresswomen's Perceptions on Why Their Presence Matters (by Kelly Dittmar, Kira Sanbonmatsu, and Susan J. Carroll) provide additional evidence to back up this claim, finding that congresswomen both identify campaigns as one of the most significant challenges they confront and report that they still feel the need to work harder than their male colleagues to prove that they belong in what remains a male-dominated institution.

Lazarus and Steigerwalt have contributed valuable data and a strong theoretical frame by which to evaluate women’s legislative behavior. Their work opens the door to other tests of their theory that integrate more qualitative evidence and interrogate potential differences in perceptions, motivation, and behavior among women—especially looking at intersections of gender with partisanship, race and ethnicity, and geography. Finally, the changing electoral dynamics for women—including the record success for Democratic women congressional candidates in 2018—offer opportunities for additional analyses that will be better, thanks to the intricate and rich insights that Lazarus and Steigerwalt have provided in Gendered Vulnerability.