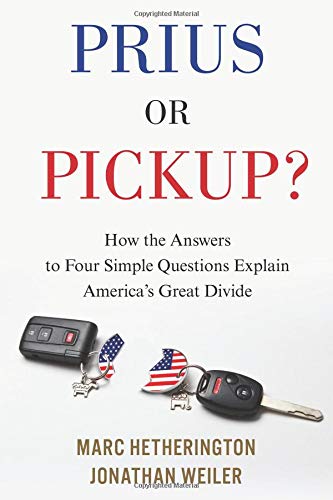 Commentators inside and outside the academy have a variety of phenomena in mind when they speak of “partisan polarization,” but one of the most important is the growing tendency for Republicans and Democrats to look not just at politics but social life in general in fundamentally different ways.

It is this aspect of the partisan divide that Marc Hetherington and Jonathan Weiler focus on in Prius or Pickup? How the Answers to Four Simple Questions Explain America’s Great Divide. Hetherington and Weiler are no newcomers to this topic: their acclaimed 2009 work Authoritarianism and Polarization in American Politics explored similar territory and remains a contemporary classic. In that earlier volume, they provided evidence that differences in authoritarianism—a preference for social conformity over individual autonomy—were increasingly central to the divide between Republicans and Democrats. Prius or Pickup picks up where Authoritarianism and Polarization left off, both refining the authors’ earlier work and making it more accessible to nonspecialists.

For starters, Hetherington and Weiler reconceptualize the notion of authoritarianism. They move away from the term “authoritarianism” and talk instead about a spectrum of worldviews ranging from fi