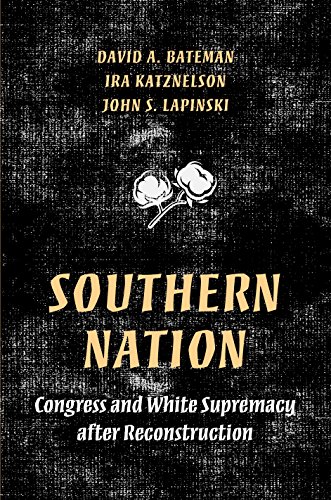 In his treatise on southern politics, V.O. Key Jr. wrote that “in state politics the Democratic party is no party at all but a multiplicity of factions struggling for office. In national politics, on the contrary, the party is the Solid South; it is, or at least has been, the instrument for the conduct of the ‘foreign relations’ of the South with the rest of the nation” (Southern Politics in State and Nation [New York: Alfred A. Knopf, 1949], 315). In an early (and laudatory) review of that book, Richard Hofstadter suggested that Key missed an opportunity to fully consider whether the South had affected national politics in more ways than through the reliable delivery of Democrats to Washington, but he noted that this might require another book (p. 7). David Bateman, Ira Katznelson, and John S. Lapinski have written that book. Southern Nation examines how the South influenced public policy, Congress, and the development of the American state from the close of Reconstruction to the beginning of the New Deal. The authors focus on the region’s role in national politics at a critical juncture when industrialization and a rapidly changing economy required new policy solutions. They show that the white South used this opportunity to rebuild its place in the federal government, secure home rule, and shape the national agenda.

Southern Nation is a worthy prequel to and extension of Key’s Southern Politics in State and Nation. The book contains empirical and historical analysis, with impressive use of charts, graphs, and case studies. The authors find that southern representatives were always willing to subordinate policy priorities in the face of threats to the racial order. This is most glaring with the failure of the Blair education bill, when fear of federal oversight led to the sacrifice of funding to combat illiteracy. Southerners also worked in unexpected ways to expand federal power over market capitalism and push the income tax by fostering alliances with Republicans.

The chapters proceed chronologically, from post-Reconstruction efforts to gain much-needed federal funding without endangering white supremacy, to shaping national progressivism, to the creation of a regulatory regime with a limited federal bureaucracy that delegated authority to the states, to the restructuring of Congress itself through changes in rules and institutional norms—including diffusion of power in the House of Representatives and the creation of a cloture mechanism in the Senate.

Where does the South end and the United States begin? The authors define the region as the 17 states that segregated schools before Brown v. Board of Education—so not just the Confederacy, or even the slave states. I appreciate this expansive view, though some might dispute whether Oklahoma (which was not a state until 1907) or West Virginia (which broke away from Virginia over secession) can properly be considered the “South.” The authors argue that the period they examine is of particular relevance because America “became a southern nation in the five and a half decades following Reconstruction by reinforcing federalism and decentralization” (p. 383). But they also recognize that we have always been a southern nation. Our founding documents legitimized slavery, the states that did not rely on the evil institution benefited from it, and racism and racial exclusion, by law or custom, are deeply ingrained American traditions. We are still at essence a southern nation, as evidenced by ongoing debates over Confederate monuments and white nationalism, along with the southernization of an entire political party.

Bateman, Katznelson, and Lapinski have written a substantial contribution to the literatures on southern politics and Congress. Moreover, Southern Nation offers an important new perspective on the enduring influence of Dixie on American political development.