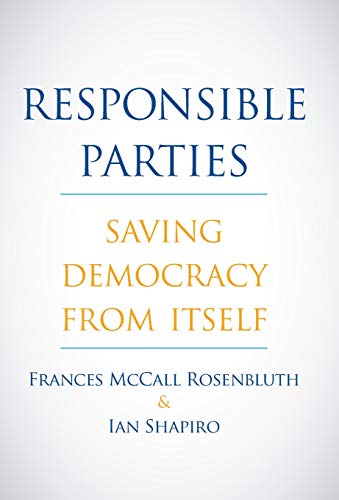 Responsible parties? Again? Every couple of decades, the concept of responsible parties finds new life among a different generation of party scholars, and it would seem as though party responsibility is experiencing yet another renaissance. As has been the case with previous rebirths of this nature, some of the current work on responsible parties is largely retrospective and more narrowly focused on the history of the debate within the discipline, as is typified by Mark Wickham-Jones’s recent Whatever Happened to Party Government? Controversies in American Political Science. Others, such as Frances McCall Rosenbluth and Ian Shapiro’s Responsible Parties: Saving Democracy from Itself, acknowledge the genesis of the responsible party thesis but go on to use the concept of party responsibility to drive a critique of both popular reform movements that have sought to undercut political parties and of scholars who have pinned their hopes for finding a cure for the ills of democracy on the application of still more democracy.

Although it is not always apparent who, precisely, constitutes the “academic mainstream” (p. 3) against which they set their argument in opposition, Rosenbluth and Shapiro contend that “competition between two disciplined parties is more likely to produce policies that serve the long-run interests o