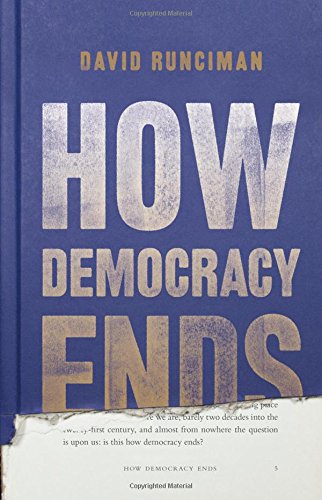 It is hardly a secret that democracy is in trouble around the world, and the phenomenon of backsliding has prompted a small wave of books diagnosing the problem and suggesting solutions. David Runciman’s contribution to this literature is a breezy and readable tour through mechanisms and alternatives. Easily weaving political theory with grounded examples, he has produced a highly accessible analysis focusing more on diagnosis than cure.

Runciman’s title is to be distinguished from accounts of how specific democracies are dying or what might be done to save constitutional democracy. Instead, he focuses on the idea that Western democracy is undergoing something of a midlife crisis. Nothing lasts forever, and while democracy has had a pretty good run, it now “looks exhausted in the places it has the deepest roots” (p. 72). Contemplating democracy’s death, the book is organized around a series of mechanisms by which this might come about: coup, environmental catastrophe, technological displacement, and the various alternatives of benevolent and not so benevolent authoritarianism that have been put on offer. His main argument is that while we are attracted to democracy because of its history, the past does not repeat itself, and we are likely to face new challenges not yet contemplated. If democracy dies, the autopsy will be a new one.

The main rhetorical trope of the book is a biological one. Systems of government, the analogy suggests, have lifespans, progressing through birth, youth, middle age, to old age. While this metaphor is a tempting and at times useful one, it is not obviously correct. One problem is the level of analysis. Focusing on democracy as a mode of government really involves a set of discrete institutions, some of which appear to be going strong. If all things must end, how do we explain the continued reliance on, say, the ideas of law, rights, or majority voting, which have been around for thousands of years? After all, even democracy’s antagonists these days use democratic forms, with elections, courts, and constitutions. These things are components of democracy, but not the phenomenon itself, which arguably has a more systemic quality. But why the system fails while some component parts can endure is not clear. Perhaps a better metaphor would be to treat systems of government as technologies that are invented, spread, and eventually are replaced by something better.

While the book strikes a sober tone, it is hardly glib. Runciman recognizes that democratic societies have great capacity for internal renewal. As he notes, democracy in the United States has shown an amazing ability to reinvigorate itself in its darkest hours. When democracy gets stuck, we tend to expand the franchise and to reinvigorate participation. Another point to note in this regard is that the news of late has not been all bad. While populist leaders are on the rise in Europe and authoritarians are spreading their influence in many other parts of the world, there have also been a few hopeful bright spots. Armenia’s “Velvet Revolution” of 2018 witnessed mass protests that threw out a corrupt leader. That same year, Sri Lanka’s democracy withstood an attempt by Mahinda Rajapaksa to come back through barely legitimate means. Many third-wave democracies, from South Korea to Chile, seem to be performing fine, despite challenges.

The point is that what appears to be a wave of backsliding might simply be a blip on a long-term upward trend, driven by citizens who wish for control over their lives. Let us hope so, but in the meantime, Runciman is a good guide to start contemplating the alternatives.