The Myth of Coequal Branches: Restoring the Constitution’s Separation of Functions, David Siemers 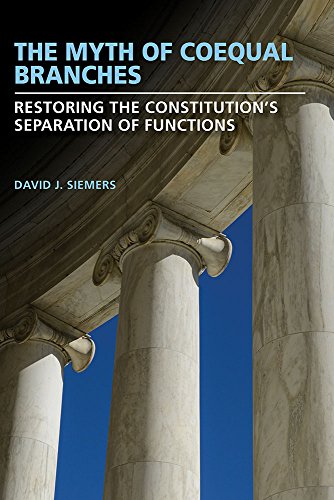 In his new book, David Siemers details the origin and perpetuation of the “coequal branches” myth in American politics, elegantly devastates it, and proposes more authentic alternatives. For Siemers, this is not a purely academic task—a correction for its own sake—but a necessary precursor to effective government.

The book describes the myth of coequal branches as imprecise and volatile—features, as Siemers points out, that allow the myth to serve the goal of the teller. The persistent conceit is that the three branches of the American federal government have, or should have, equal influence over policymaking and, to a lesser extant, that interbranch cooperation is essential for policy creation and execution. The credulous suggest that the Framers of the U.S. Constitution intended coequality and that their “warped vision of constitutional theory has taken hold through repetition and has been used to sell a wide array of political products that have no constitutional validity” (p. 23). These political products are the phenomena that energize the study of American political institutions. Each receives its own chapter: the aggrandizement of the executive, judicial overreach, and a hyperpartisan and stolid Congress.

After demonstrating the inexactitude of the term “coequal,” Siemers offers and justifi