Subsidizing Democracy: How Public Funding Changes Elections and How It Can Work in the Future, Michael G. Miller 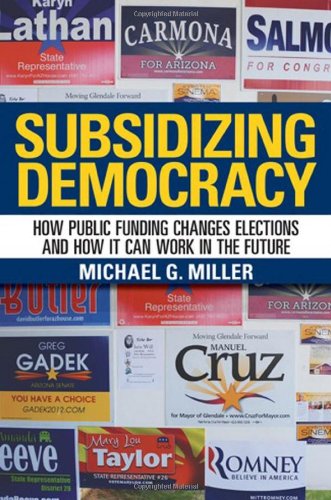 Most empirical research on campaign finance reform attempts to identify the effects of reform using large quantities of data. These studies are useful, but do not present a complete picture of how reform influences electoral dynamics, because they lack information on underlying causal mechanisms. Michael Miller’s research, based on surveys and interviews of state legislative candidates, is a welcome addition to the literature and nicely complements existing research by examining how public financing, and in particular the “clean elections” regimes in Arizona, Maine, and Connecticut, affect the behavior of candidates and voters.

One of the central goals of public financing is to free candidates from endless fundraising, allowing them to spend more time communicating directly with voters. Miller’s survey results indicate that this is the case; candidates that accept full public funding spend significantly more time engaging voters. This was not the case for candidates who received partial public funds in states such as Minnesota and Wisconsin; even though they received some public money, this did not reduce the time they spent acquiring private funds (these findings are part of a larger pattern in Miller’s analysis, suggesting that clean elections regimes have significant positive impacts but that the effects of partial public financing are minimal). Clean elections also affect voters. In a novel analysis, Miller finds that voters are less likely to “roll off” (that is, skip) down-ballot races when there are candidates who accept full public financing on the ballot, and, more generally, finds that clean elections regimes decrease the propensity of voters to roll off.

Despite these findings that support the goals of campaign finance reformers, some other analyses are less supportive. Miller concludes that full public financing is used most often by candidates in races in which they are almost certain to lose, and is most likely to be used by the least-experienced candidates. This is the result of strategic calculations by candidates, inasmuch as more­experienced or competitive candidates have stronger incentives to eschew public financing and raise funds from private donors. Miller does not find much evidence that clean elections in Arizona prompted more-experienced or competitive candidates to run for office, which is one of the reformers’ primary goals. In general, the analysis presented in this book provides support for clean elections regimes, but also highlights some challenges facing reformers as they work to improve on current policy.

There are a couple of places where Miller’s analysis needed to be expanded or clarified. First, he could have done more with the interview data. In addition to closed-ended surveys, Miller conducted open-ended interviews with candidates in Arizona. He uses these surveys to provide anecdotes, but it would have been valuable to examine the responses systematically through a qualitative coding or classification scheme. By doing so, he could have added more substance to the analysis of the closed-ended survey responses. Also, Chapter 5 discusses candidate quality, but Miller does not clearly operationalize the concept of “quality.” He rejects using past electoral experience as a measure, but his failure to derive an alternative leads to a disjointed and confusing analysis. Along those same lines, many of the analyses presented could have been developed further. At times, the book reads like a dissertation, needing further revisions to add nuance and complexity to both the theoretical foundation and empirical analysis.

Despite these reservations, this book makes an important contribution to our understanding of campaign finance reform and is a welcome addition to the literature.