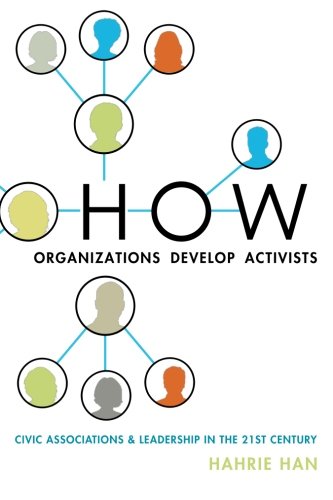 Turnout for the 2014 midterm elections hit a 72-year low of 36.3 percent. Fewer than half of eligible voters participated in 43 states, and fewer than one-third voted in the three largest states (California, Texas, and New York). Even less common are forms of political participation that require more time and effort, such as attending a local political meeting or rally. According to a recent Pew Research Center study, only 22 percent of survey respondents had attended a meeting on local, town, or school affairs in the previous year, and only 10 percent had attended a rally or speech. What moves individuals to be civically active, to work with their fellow citizens to solve problems and change public policy? A groundbreaking new book by Hahrie Han, How Organizations Develop Activists, uses in-depth observations of and interviews with members of high-and low-engagement chapters of two national organizations to answer this question.

Distinguishing between transactional mobilizing and transformational organizing, Han finds that high-engagement chapters differ particularly in their use of strategies that develop the capacities of others rather than identifying individuals with latent skills and interest. Mobilizers find supporters by casting wide nets and focusing on developing attractive pitches to potential members; organizers, in contrast, work to transf