Back Channel to Cuba: The Hidden History of Negotiations between Washington and Havana, William M. LeoGrande and Peter Kornbluh 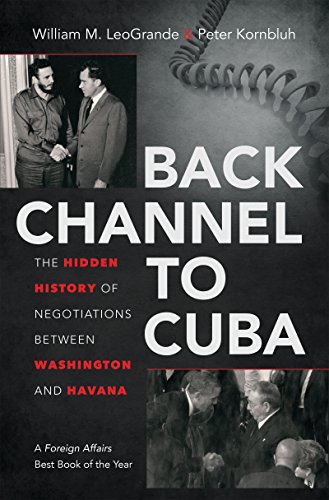 With impeccable timing, the University of North Carolina Press published William M. LeoGrande and Peter Kornbluh’s masterful account of U.S.– Cuban relations on the eve of the December 2014 announcement that the two countries would be resuming diplomatic relations. (An updated paperback edition published in November 2015 includes an epilogue about the negotiations that led up to the announcement.)

The authors use the myriad negotiations in which the United States and Cuba have engaged since 1959 as their prism in recounting the history. While most of the meetings were formal state-to-state encounters, many of the negotiations occurred through back channels. These included reliance on high officials from third countries such as Mexican president José López Portillo, journalists such as Scott Armstrong, and even Nobel Prize–winning author Gabriel García Márquez. The details of these encounters provide vitality to the book and add a freshness to events that others have described only in outline.

For example, Márquez was able to convey a message to President Bill Clinton because writer William Styron invited both to a summer dinner party on Martha’s Vineyard while Clinton vacationed there. At one point former ambassador William Luers realized that Clinton was feeling “ambushed” and quietly suggested to Márquez that he change the subject. The novelist asked Clinton what he was reading, and the president responded enthusiastically with a discourse on William Faulkner and literature.

Based on interviews with key participants in the negotiations and the most complete collection of documents available—many of which were declassified because of the authors’ requests—the book provides a few important revelations. The most dramatic is the existence of a 1976 set of contingency plans to “crack the Cubans” if they became involved in Namibia or Zimbabwe in addition to Angola. The “Cuban Contingencies,” which were developed at the behest of Secretary of State Henry Kissinger, included measures that ranged from deterrence to military retaliation, even if that led to a direct confrontation with the Soviet Union (pp. 148–150).

This study effectively counters a popular explanation for the 55-year history of hostility between the United States and Cuba: that Fidel and Raúl Castro actually wanted to maintain the United States as an enemy in order to justify internal repression and stoke the embers of Cuban nationalism. The authors reasonably conclude, “If anything...the Cubans have been too eager to negotiate and too gullible in believing U.S. promises” (p. 407). They also draw lessons that might guide the United States in its relations with other Third World adversaries. Perhaps most importantly, the study demonstrates that even under circumstances of “intense hostility,” a dialogue about issues of mutual interest is possible. But in order for the interaction to be productive, the United States must accord respect to its weaker adversary and not expect it will respond well to demands that seem as if they require an obsequious concession.

Despite these contributions, two flaws in the study stand out. First, the history is written largely from the U.S. perspective. The blame for this falls largely on the Cuban government, not the authors, who pressed the Cubans to release more documents and reveal more in interviews. Second, the optic of negotiations inexorably led the authors to include details about minor or inconclusive episodes that tended to inflate the significance of these interactions within the larger account of the 50-year relationship.