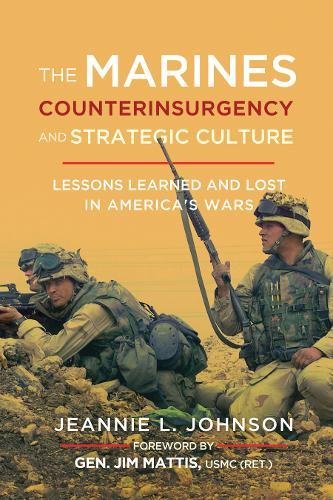 The release of a new military doctrinal manual on counterinsurgency in 2006 was met with widespread acclaim. Downloaded more than a million times in its first month, the manual seemed to signal an era of innovation for the military and to burnish the reputations of Generals David Petraeus and James Mattis as forward-thinking leaders. But from the perspective of 2018, the promise of that manual and of the U.S. military's ability to successfully wage counterinsurgency has fallen woefully short of expectations.

Explaining why and how the military failed to adapt to the challenges of America's post–September 11 conflicts is the premise of Jeannie L. Johnson's The Marines, Counterinsurgency, and Strategic Culture: Lessons Learned and Lost in America's Wars. Johnson's book is a welcome, and much-needed, addition to our conversations about the role of military force in American foreign policy.

Johnson approaches the question with an in-depth look at the United States Marine Corps and how its culture has shaped its approach to counterinsurgency. Johnson provides a comprehensive overview of the history and evolution of the culture of the Marine Corps, with an appropriate focus on its struggle to achieve and maintain an independent identity separate from the U.S. Army and U.S. Navy. This struggle is rightly understood as a defining element of Marine Corps culture but is rarely examined for how it influences the service's approach to conflict.

Correspondingly, if there is a weakness to Johnson's analysis, it is her reliance on the self-perceptions of Marines about the Marine Corps. This is fine for assessing internal culture, but Johnson sometimes presents Marine perspectives on operational performance and external reputation as objective fact. Early in the book Johnson calls for similar studies of the other services; a comparative analysis would offer useful perspectives.

In a similar vein, Johnson also sometimes relies on tactical perspectives to assess Marine innovation. It is understandable that Marines would laud their own drive and aggression for the duration of a seven-month deployment in a counterinsurgency campaign (p. 117), but how did operational and strategic leaders believe that such a rotation plan was appropriate for waging a counterinsurgency? It is hard to imagine that an American university, seeking to stand up a new department, would find it suitable to rotate in non-English-speaking academics from other countries to oversee the effort in seven-month increments, with little to no continuity between those rotating in. Yet this same approach for reshaping foreign countries is approved without question by both Marine leadership and policymakers.

Johnson does not address this particular absurdity directly, but she deftly lays out how the interplay between Marine Corps culture and the broader American strategic culture can lead us to confuse tactical success with progress toward strategic objectives. As Johnson summarizes America's national strategic culture in the second chapter, America's approach to the world is often ahistorical and overly optimistic, driven by a belief that with the right attitude Americans can solve anyone's problems, generally through the liberal application of technology and the imposition of American systems and norms. Johnson's work highlights how this tendency is compounded further, and can become downright counterproductive, when carried out by a military force with a bias for action and a tendency to place violent engagements at the core of its identity.

For too many Americans, the military is a distant entity, seen only through the lens of recruiting commercials and Hollywood portrayals. The military, meanwhile, is increasingly an insular and isolated tribe, with the preponderance of new recruits coming from families with a history of military service. This separation makes efforts to understand the military and its capabilities even more important, and works like Johnson's all the more valuable.