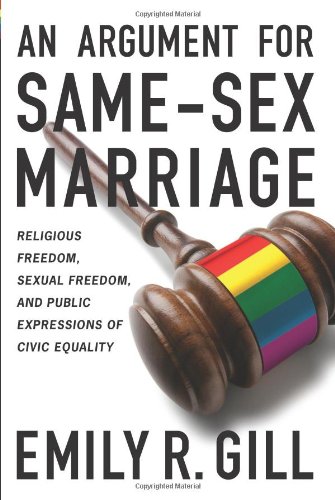 This timely book, as its straightforward title announces, provides an argument for same‐sex marriage based on the author’s reading of the contemporary legal and social landscape, with a particular eye to understanding the prohibition of same‐sex marriage as a public expression of civic inequality. As the preface lays out, Emily R. Gill began thinking about same‐sex marriage within the context of United States Supreme Court decisions in the wake of the endorsement test that Sandra Day O’Connor proposed in Lynch v. Donnelly. If the government ought not classify some citizens as outsiders because of a policy that seems to endorse certain religious beliefs over others, why should the government play the role of creating insiders (those who can) and outsiders (those who cannot) when it comes to marriage? For Gill, the answer is simple: it should not. Throughout this book, Gill stresses the similarity between religion and sexuality.

While the pairing of religious freedom and the freedom to marry might sit uneasily for some readers, in Gill’s adept hands the analogy is successful. The concept of neutrality and the government’s role in maintaining it is at the core of Gill’s argument. In her hands, the seemingly straightforward notion of neutrality is a complicated and nuanced one,