The Poor Among Us: A History of Family Poverty and Homelessness in New York City, Ralph da Costa Nunez and Ethan G. Sribnick 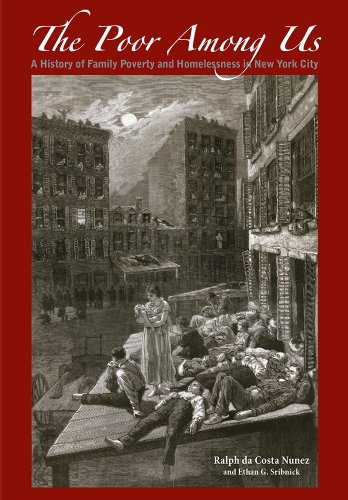 When in the late 1970s New Yorkers en route to work came face to face with thousands of men and women sleeping and begging on the streets and in train tunnels and bus stations, the government of the City of New York, facing court order, opened emergency shelters for the homeless. Less visible were the 5,000 families with children who were sheltered in commercial hotels and by nonprofit service organizations. This surge in need had not been seen since the Great Depression, and the City government said it was temporary. But many families could find no safe place to go, and more came in, and years after the sheltered families with children pushed up to 10,000. Almost 40 years later, the shelter beds for single adult men and women have now decreased, but the families have multiplied.

The authors of this study have taken stock of this experience and have confronted the question, “Why, after all this time, are there still families unable to afford basic human necessities, including housing?” (p. 2). Their query reaches as far back as the first Dutch outpost of a thousand people in the 1620s and traces the families across every era through 2012. This analytical narrative gives us distinctive pictures of the economic conditions of each period and how the economic realities of daily life impinge