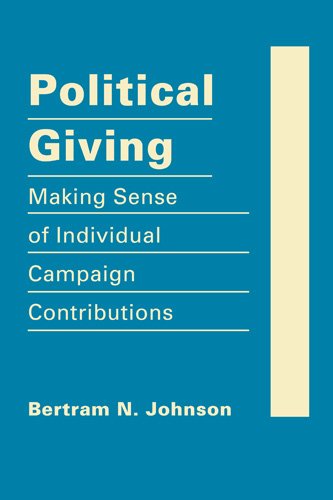 Why do individuals contribute to political campaigns? The question bears asking since, in spite of the considerable attention paid to organized interests and their political action committees (PACs), individual contributions make up the largest share of federal campaign receipts. In particular, Bertram N. Johnson’s new book asks why so many individuals give in amounts too small for them to expect any material return. Johnson outlines a typology of potential incentives for giving that includes material, solidary, purposive, and expressive incentives. Though political scientists have written extensively about material and solidary reasons for giving, the author argues that purposive and expressive incentives have been overlooked. Purposive incentives originate from the in­trinsic satisfaction of contributing to promote a desired social or political outcome; expressive incentives are based on the utility gained from articulating particular values. The author generates a number of hypotheses based on these incentives including, in the case of purposive incentives, that individuals with strong political preferences will be more likely to contribute.

Before testing his hypotheses directly, Johnson devotes a chapter to the interesting history of individual political donors in American politics.