Facebook Democracy: The Architect of Disclosure and the Threat to Public Life, José Marichal 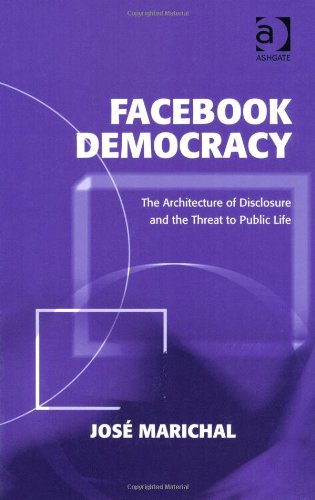 Without a doubt, the Internet is changing the way we interact with the political world. As citizens, we not only struggle to fully understand how the Internet changes the way we think about the world, but we struggle with understanding how such changes affect behaviors. One of the largest, popular Internet Web sites today, Facebook, is poised at the center of these changes. As a social networking site, Facebook stands as an entity poised to be of critical, if not vital, importance to the manner in which citizens participate in politics.

José Marichal contributes to this discussion with an insightful look at the interplay of citizens and social networking sites. As an examination of the Facebook platform and the philosophy behind how people actually network on the site, Facebook Democracy offers a fascinating contribution to the study of political communication. Throughout this study, Marichal outlines what he terms Facebook’s architecture of disclosure. In the opening pages, Marichal describes how Facebook has created an expectation that users should openly share personal information on the social networking site. This sets the stage for a rather dynamic discussion of the medium that pulls from multiple academic disciplines. Marichal supplants this work with a content analysis of 250 F