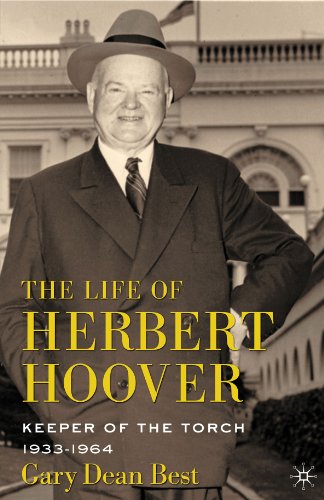 Voters summarily ousted Herbert Hoover from the White House in 1933, and casual readers of history might assume that he promptly disappeared from the public scene, lost in the shadow of Franklin Roosevelt. As late author Gary Dean Best’s extremely detailed and expansive Keeper of the Torch demon­strates, however, Hoover was, in fact, a visible and active former president, working tirelessly and for decades to revive his legacy, nurture his ideology, and rescue his Party’s political fortunes. Prior works by Best and others have portrayed Hoover as a remarkable man diminished by the presidency, a man whose keen intellect was unsuited to the mire of politics. This volume picks up that theme in 1933, offering a portrait of the post‐presidential Hoover as a brilliant, complex character, sometimes angry, often shrill and contentious, relatively unskilled in the art of politics but always engaged in public affairs.

The meticulous historical scholarship on display in Best’s final volume is impressive, as the author essentially retraces Hoover’s steps over the course of 31 years, at times providing a day‐by‐day chronicle of events. The detail can, at times, be overwhelming, a limitation explained in part by the production process behind the volume. Best died after producing the manuscr