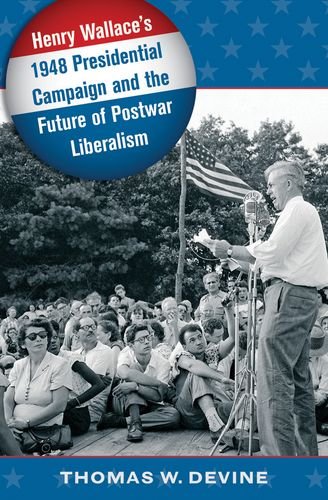 The Progressive Party that nominated Henry Wallace as its presidential candi­date for 1948 stands as one of the boldest experiments in third‐party politics. Some historians have depicted Wallace as a heroic leftist, a man who challenged the Cold War drift toward “reaction” and “red‐baiting.” He “spoke out force­fully” for the “common man” against the “stooges” of Wall Street, while politics trended rightwards (p. xi). For others—including anti‐communist liberals— Wallace was a pawn of the Communist Party (CPUSA), following the line of political advisers who took cues from Moscow.

Thomas Devine has written a book that tackles this debate with intelligence and accomplished research. He walks an elegant tightrope, arguing that, yes, the CPUSA followed the Cominform’s orders to play hard ball in American politics by forming a third party (sometimes misreading directives) but that there were also independent liberals animated by idealism and that “Wallace himself was not subject to Communist discipline” (p. 34). For sure, Wallace was a victim of sinister advisers, especially Calvin Benham (Beanie) Baldwin, who selected unrepresentative members of labor unions to plead for Wallace to run (Devine points out t