The Making of Southeast Asia: International Relations of a Region, Amitav Acharya 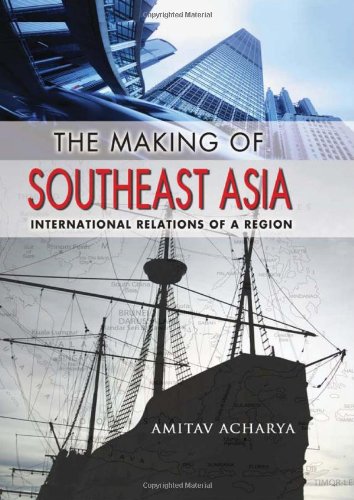 This insightful book focuses on Southeast Asia and has broader conceptual relevance for the examination of regionalism and international relations generally. Published in 2012 by the Institute of Southeast Asian Studies and reprinted in 2013 by Cornell University Press, this is the second and substantially revised edition of The Quest for Identity: International Relations of Southeast Asia, which first appeared in 2000. It addresses the major social, cultural, and eco­nomic forces at work in the region, but also presents Southeast Asian regionalism as an ongoing political project to accommodate strong and/or weak national and sub‐national forms of identity (and the nation‐states to which they are connected) to notions of a wider regional identity.

Building on Benedict Anderson’s Imagined Communities (London: Verso, second revised edition, 1991; first published, 1983) Amitav Acharya argues at the outset that regions, “as with nation‐states” are “imagined” and “socially constructed.” He notes that “regional coherence and identity are not givens” but flow from the ongoing articulation of an “imagined community” by elites and/ or the population of the region (pp. 21–23). The author also emphasizes that the pre‐colonial past is often used selectively to strengthen a contemporary sense of regional identity (pp. 35, 42–43). He notes critically that in the context of decolonization after 1945, some elites viewed “post‐colonial regionbuilding as a matter of restoring the pre‐colonial integrity of the region” (pp. 81–82).

The author traces the first stirring of Southeast Asian regionalism to the 1960s, when “moderate nationalist leaders” who had presided over the transi­tion from colonies to nation‐states and the onset of the Cold War founded the Association of Southeast Asian Nations (ASEAN). Its membership initially included only the key anti‐Communist nation‐states of the Philippines, Indonesia, Singapore, Malaysia, and Thailand. While the Cold War divided the region, it may also have “inadvertently contributed to the regionalist cause by promoting solidarity among like‐minded regimes,” even though the nationstates that were initially excluded from ASEAN at the time of its founding in Bangkok on 8 August 1967, particularly, “the Indochinese countries,” viewed it with “open hostility” (pp. 293, 155–174, 215).

This would change with the end of the Cold War, when a unified Vietnam (1995), along with Laos (1997) and Myanmar (Burma; 1997) and eventually Cambodia (1999) were inducted into ASEAN (p. 215). The expansion of ASEAN in the 1990s took place alongside the growing economic dynamism of Southeast Asia as well as the wider Asian region. The desire of elites in Southeast Asia to benefit from the economically driven processes of national development led to both a reiteration of national sovereignty and the strengthening of the idea of a Southeast Asian region to mediate internal and external economic processes and geopolitical changes. More specifically, the nation‐states of ASEAN had to face the challenges associated with the rise of China and the emergence of India as economic and/or international actors in the post‐Cold War era.

Acharya also looks at the uneven impact of radical political Islam, particularly after September 11, emphasizing that promoters of a radical (ter­rorist‐based) set of Islamic fundamental goals “never had the potential to overwhelm” Southeast Asia, whatever their ambitions might have been. Ter­rorist groups remain a cause for concern, but are not a major threat to national or regional stability. In fact, in terms of human cost, the author emphasizes that the 2003 Severe Acute Respiratory Syndrome epidemic, the 2004 tsunami in the Indian Ocean, and the 2008 cyclone that hit Myanmar (Burma) caused far more death and destruction (and translated into more‐significant regional political challenges) than did Jemaah Islamiyah, the group behind the Bali bombing in October 2002 (pp. 247–254). I liked this book; it is an impressive treatment of Southeast Asian regionalism that also has analytical relevance for the study of regionalism in relation to the contemporary international order.