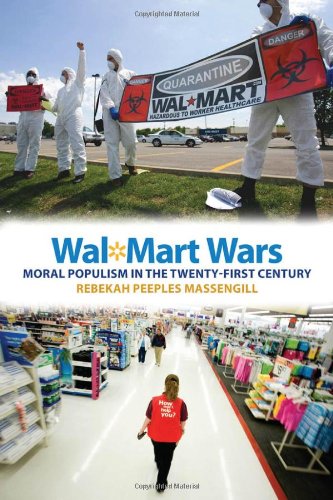 The rhetoric of political argument is inherently moral in character. Whether directly or by implication, it refers to conceptions of rights, justice, virtue, obligation, and fairness, and it makes claims about the institutional designs that safeguard these. The rhetoric may or may not be self‐conscious, and it may be either authentic or cynically manipulative. But it always registers the moral foundations of the culture that sponsors it, reflecting, reinforcing, and even reimagining them.

This is the terrain of Rebekah Peeples Massengill’s perceptive study of the political contests in the United States over the role and behavior of the giant retailing corporation, Wal‐Mart. She wishes to understand the uses made of moral language and categories by disputants on both sides of the Wal‐Mart controversies, and, in particular, how these uses differentially relate to moral conceptions of the market. She also argues that the case study illustrates general moralizing processes in public debates about markets in the United States, as in such cases as health care reform, tax reform, and government bailouts of major corporations. Generally, then, it is an examination of how Americans make sense of the “moral dilemmas of modern capitalism” (p. 4).