The Federalist Society: How Conservatives Took the Law Back from Liberals, Michael Avery and Danielle McLaughlin 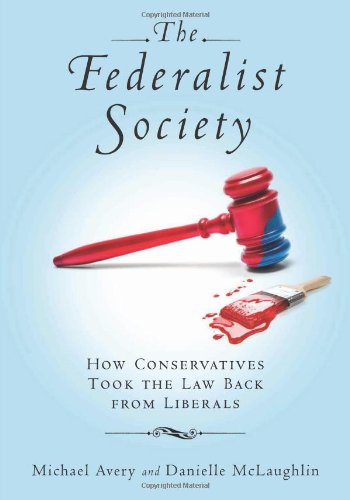 At 30 years old, the Federalist Society for Law and Public Policy Studies has matured into a nationwide network of more than 40,000 academics, practi­tioners, judges, politicians, and law students dedicated to restoring conserva­tive and libertarian legal values to America’s institutions. Although it is acknowledged by both friend and foe as an organization of significant conse­quence, scholars and political scientists have only recently started to grapple with the important question of how exactly we ought to understand its influ­ence on the shape and direction of American law and policy. With The Federalist Society, Michael Avery and Danielle McLaughlin enter this conversation. Written by two lawyers and targeted at a popular audience, the Federalist Society suffers from a bit of an identity crisis; it is part legal analysis, part popular journalism, and part social science. By trying to increase its audience appeal in this manner, unfortunately, The Federalist Society fails to do any of these exceedingly well.

While it does not introduce any new evidence or original interview data, The Federalist Society’s introduction and opening chapter aggregate and summa­rize existing scholarly and journalistic work that has been done on the Feder­alist Society, detailing the fo