An Education in Politics: The Origin and Evolution of No Child Left Behind, Jesse H. Rhodes 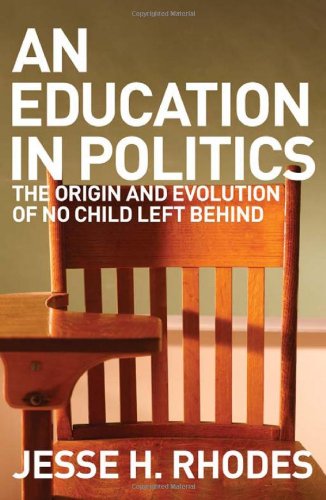 On substantive grounds, Jesse H. Rhodes’s An Education in Politics is yet another detailed account of the history and politics of No Child Left Behind (NCLB), the watershed federal legislation adopted in 2001 that sought to bring accountability to the nation’sschools.Rhodes’sapproach,however,is explicitly theoretical—a very good thing—and his aim is to contribute to the “institutional theory of change.” Claiming that other scholars of political institutions have tended to focus either on the “agency of political entrepre­neurs” or the “institutional constraints” that limit them, he argues for a unified approach that brings the two together into proper balance. His solution is a theory of “institutionally bounded entrepreneurship,” which he formulates early in the book and then employs to structure the historical analysis that follows.

In this analysis, he argues that the political entrepreneurs driving account­ability reform during the entire modern era—from the 1980s through NCLB to the present—were business and civil rights groups, and that they succeeded in ramping up federal involvement and bringing a measure of change. But he also argues that the institutional constraints were seriously limiting, and that out­comes took the form of extensive delegation to state and local governments, a disjointed layering upon existing institutions, and the “striking persistence” of traditional structures. A weak and even bizarre incrementalism won out over transformation.

The book has three virtues. One is its emphasis on a balanced theory, and thus on paying attention not just to change but also to the constraints on change. The second is its sober assessment that reform during the modern era has been limited, fragmented, and lacking in coherence—which contradicts certain claims in the literature that NCLB was transformational. The third is its detailed evidence on the ideas, strategies, and resilience of business and civil rights groups over more than two decades of struggle.

There is much of value here, but the analysis also has its weaknesses. A basic problem is that Rhodes’s theory does not have a coherent internal logic that would give it analytic bite and tell us how actors can be expected to behave. Instead, it rests on two shaky foundations. The first is a set of five “claims” about the players and their context. Claim number one, for example, is that “political entrepreneurs foster institutional change with creative rhetorical and organi­zational maneuvers.” These claims are not suitable as the core building blocks of a theory. The second element is a typology of “overarching groups” that he uses to categorize the many players that populate his analysis. There are five types: business entrepreneurs, civil rights entrepreneurs, educational liberals, educa­tional conservatives, and state officials. The key vested interests (and opponents of reform) in American education, the teachers’ unions and the school districts, are simply lumped together along with many other actors under the heading of educational liberals.

The analysis mostly unfolds in terms of what the different types of actors are doing. As a result, unions and districts are rarely given serious theoretical attention as political actors. They and lots of other actors are just educational liberals, and Rhodes’s historical account is filled with generic statements like, “Educational liberals worried that tests would discriminate against disadvan­taged students and make teachers and schools accountable for results.” In much of the analysis, there is no way to tell who is doing what or why.

The why part is especially vexing. Rhodes is aware that unions and districts have interests that lead them to oppose reforms, and occasionally he says so, or refers abstractly to such things as “entrenched” interests. But he also says that educational liberals are concerned about segregation, inequality, and disadvantaged children—the sorts of concerns that are associated with liberal ideology (as the group label would suggest). There is no sustained sense that deep vested interests are at stake here, no attempt to clarify what they are or to explore their consequences for politics. Indeed, the term “vested interests” is not used once in the entire book. Nor is there any mention of the word “jobs” in connection with the interests or political positions of teachers’ unions. Why the unions do what they do is simply not a focus of Rhodes’s analytic attention, and is left vague and unspecified. The same is true for the school districts.

That being so, Rhodes never really follows through on his aim of building a balanced theory that takes the constraints on change as seriously as change itself. In his account, educational liberals are portrayed (correctly) as the main opponents of accountability throughout the entire era. Yet there is no theory of their behavior, no analytic foundation to help us understand what drives the resistance that reformers were up against. He also argues that state elected officials—while supportive, he claims, of accountability reform—were a major source of constraint and a force for debilitating decentralization owing to their concern for preserving state and local autonomy. Yet in lumping governors and state legislators into the same “overarching group,” he fails to recognize that their incentives as politicians are in fact very different, that governors tend to be far more supportive of reform than state legislators—and crucially, that the latter are heavily influenced (and turned against reform) by the state‐level power wielded by teachers’ unions and school districts.

The result is a treatment of institutional constraints that cannot tell us much. No one would doubt that entrepreneurs are “institutionally con­strained,” but there is no theory here to explain why institutional actors do what they do. Rhodes also pays little attention to the pivotal question of why these actors are able to exercise power—and thus to be constraining. What exactly is the source of the teachers’ unions’ power? Why do national politicians often respond to what they want? Similarly, how do school districts and state elected officials exercise power at the national level, and why would national politicians respond to their policy preferences? On these and other crucial counts, Rhodes provides no analytic basis for understanding how the institu­tional constraints—via the exercise of power—actually operate.

At the end of the day, this is not a book that aims to shed light on the powerful interests that resist education reform. It is mainly an attempt to shed light on the groups that try to make it happen. In Rhodes’s telling of the decades‐long accountability saga, the lion’s share of the attention goes to business and civil rights groups. They are the key political entrepreneurs, the agents of change. And they are the focus of the book.

Without a coherent theoretical account of the resistance these entrepreneurs are up against, however, Rhodes is unable to provide an enlightening perspec­tive on change—and, in particular, on how these change‐agents can be suc­cessful. The key to the entrepreneurs’ success, he argues, is that they “craft a powerful narrative” that can convince others to support their policy ideas. And their ability to do that turns most critically on “their extensive knowledge—not just of the intimate details of policy, but of the important ideas, people, and institutions that compose the policy community—and their longevity, which allows them to learn from past experiences, apply lessons to new contexts, foster long‐term relationships with individual policymakers, and serve as a form of institutional memory for less‐experienced participants.”

This is all very diffuse and complex, and only tenuously connected to a logic of power and interests that would help us understand the struggle between reformers and their opponents. Why would politicians support the reformers’ good ideas when there is raw power arrayed on the other side? How do expertise, learning, and personal relationships translate into raw political power—and enough of it to overcome the strong resistance of groups that are unmoved by ideas, and only care that their interests are being threatened? A theory of change needs to be able to answer these sorts of questions, but it cannot do that by focusing on the reformers themselves and failing to develop an underlying theory of resistance and stability.