He Runs, She Runs: Why Gender Stereotypes Do Not Harm Women Candidates, Deborah Jordan Brooks 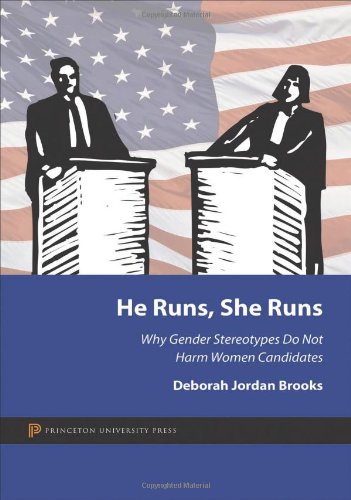 The conventional wisdom, as understood by campaign strategists and the media, is that being a woman is a liability in electoral politics. Female candi­dates face an impossible task—they must convey the toughness, competence, and confidence of a politician, while simultaneously conveying the warmth and modesty of a lady. Consequently, it is much more difficult for women to successfully navigate a political campaign. Anecdotal evidence supporting this conventional wisdom is easy to find. However, systematic evidence is scarce. Is it possible that the conventional wisdom is just plain wrong? Deborah Jordan Brooks contends that it is.

In a series of experiments using a representative sample of 3,000 U.S. adults, she finds that voters are remarkably even‐handed in judging male and female candidates and politicians. Brooks randomly assigns respondents to read one of eight scenarios involving either “Karen” or “Kevin Bailey.” These scenarios include an evaluation of Karen/Kevin’s fitness for office when s/he has exten­sive experience and when s/he has minimal experience. There are no significant differences in how Karen and Kevin are evaluated in the first, and Karen may be slightly advantaged in the second. The next group of scenarios presents ficti­tious news reports of “Representative Karen/Kevin Bailey” crying, displaying anger, exhibiting toughness, showing a lack of empathy to constituents, and getting caught in a knowledge gaffe. Again, across a wide variety of outcome measures, respondents penalize or reward Karen and Kevin similarly.

Brooks dubs this the “leaders‐not‐ladies” phenomenon: once a woman enters the realm of politics, she is judged as a leader, not as a lady. The “double bind” is solved in this way, so party gatekeepers and prospective candidates should stop assuming that being a woman is a political liability. It turns out that all politicians walk a fine line between toughness and empathy and compassion and competence, not just women.

With 180–200 respondents per cell, it is possible that Brooks’s experiment just does not have the statistical power to identify the respondents’ prejudices. And because her presentation of results appears to be targeted toward readers who are not very interested in statistical details (even in the appendices), it is difficult to ascertain whether this might be the problem. Given the fact that so many similar experiments in, for example, business, do reveal gender biases, there is reason to be skeptical. Nevertheless, if voters’ biases were substantively very large, at least some of her outcome variables would show differences. Almost none of the dozens of tests do. So while it might be hasty to dismiss the conventional wisdom as wholeheartedly as Brooks does, it is reasonable to conclude that voters are probably fairer than many observers assume they are.

Additionally, it is odd to ignore the fact that the concept of “leaders‐notladies” is itself gendered. Gender stereotypes may not disproportionately harm women, but they may still operate. Is the leadership penalty for crying justified? More or less justified than penalty for an angry outburst? Brooks avoids these normative questions. That is her prerogative, but it left a hole in the discussion.

In short, this is an important book that deeply challenges a powerful assumption. Brooks’s decision to use experimental methods allows her to compare apples to apples, which is impossible with observational data. There are valid questions about the external validity of a survey experiment like this, but that does not diminish the importance of what she has done. It will be exciting to see how future researchers build on this study’s findings. Brooks has written a book that gender and representation scholars—as well as party gatekeepers and potential candidates—cannot ignore.