Evolving Iran: An Introduction to Politics and Problems in the Islamic Republic, Barbara Ann Rieffer‐Flanagan 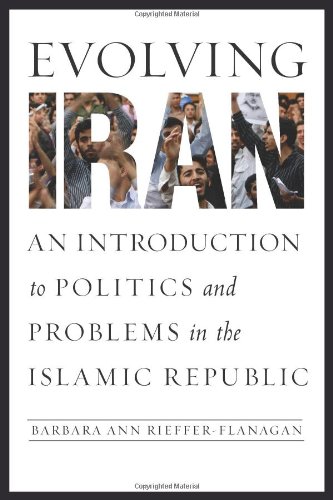 This book is a timely volume on the aftermath of the 1979 Iranian revolution. The author tries to articulate the enigma of counter‐secular forces that in an instant catapulted Ayatollah Khomeini and his followers to power less than a year after February 1979. Moreover, hostage taking at the U.S. embassy (November 1979) and the Iraqi invasion under Saddam Hussein (Septem­ber 1980) are among the two pivotal and entwined, if implicit, reasons that nailed the lid on the coffin of all political opposition. As stated by the author, “This book seeks to explain the creation and development of the theocracy in Iran” (p. 11).

This volume, however, presents a level‐headed picture of today’s Iran beyond prevalent clichés in the American press and think‐tank/lobbyists in Washington. The original cause of the February 1979 insurrection is somewhat decoded in the early chapters. The author alludes to the enduring effects of the 1953 Central Intelligence Agency coup d’état that overthrew the elected gov­ernment of Mohammad Mossadegh and brought the Shah back. Barbara Ann Rieffer‐Flanagan is explicit on what is known as the “capitulation”—the longanticipated tip of colonialism/neocolonialism through the Constitutional Rev­olution (1906–1911), and o